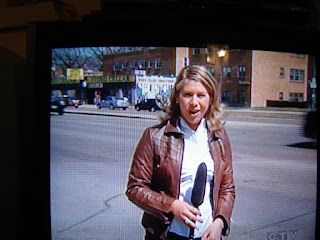 Just a quick update on my friend S.
On Monday, CTV news aired an interview with S to give details of her attack that occurred over a week before. S (CTV does give her name, but to give her some privacy, I won't here) and a friend were out to rent a movie (at that video store in the photo) and they were swarmed by a group of girls, they proceeded to kick, punch and jump on her head saying they would kill her and break her neck. To try to escape the beating, she ran into oncoming traffic only to have cars swerve around her and avoided the call for help for someone in trouble. A family with kids finally did stop and the attack ended, leaving S with various injuries. The good news is that S looks and sounds really good and she seems to be taking this whole thing quite well. 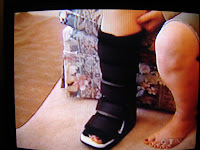 What kind of bugs me is this incident wasn't mentioned on any other media (newspaper, radio or other TV networks) and it probably only aired then because of the death of Erin Pawlowski, the 35 year-old North Ender that was returning home from work and was beaten at a bus stop on Selkirk Ave two Thursday's ago (he died of his injuries this Monday). The suspects of S's case are 5 girls estimated to be 14 years old, my question is, have the police been investigating this before the news report or do they consider this a waste of time?
Posted by binky at 10:32 AM 1 comment: 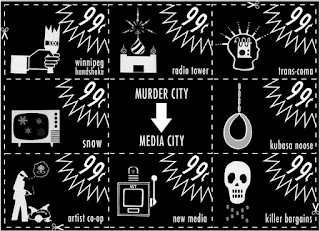 Earlier this week I was suppose to meet a friend of mine for lunch to discuss plans for a project this summer we are co-coordinating. Well, I was shocked to hear she couldn't make it because she was the victim of an assault, she and a friend were attacked as they took a Sunday evening stroll down Main Street. This wasn't the scary part of Main St. near the Northern Hotel (close to Selkirk Ave.) or downtown, nope, this was north o

f Inkster when it turns into one of the Kildonan's, a seemingly quiet area. Twenty years ago I used to hang out at the North Main Sals for late night coffee, pie and card games (as well as watch my girlfriend and her pals chain-smoke) for hours.

She was attacked by a group of teenage (probably underage) girls who proceeded to beat and kick the crap out of her, totally unprovoked. Before I go on I should mention she (I'll call her "S") had no crap in her to start with, S is a sweet, kind person who is not threatening in any way, probably all the more reason to target her. S was left with a broken leg and multiple facial injuries, she felt she was lucky b 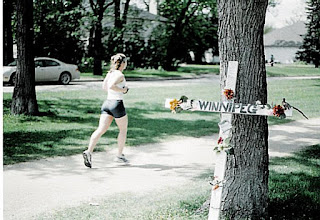 ecause she wasn't killed, as they tried to snap her neck and smash her head. I'm sure she has never experienced anything like this before, physically she'll recover, but emotionally it will take longer, but I know she has a real strong character and drive, so she'll be alright. Oh, and of course they took her purse, I'm not sure if this was the incentive, the reason they attacked her or if it was the added bonus after they satisfied their thirst for blood. All week this incident has caused much bitterness in my mind, If I feel all this anger towards this stupid senseless act, how does her family and friends feel?

Like many Winnipegger's, there is a feeling of frustration with our justice system. S's uncle told me that the police said to her it was pointless to pursue any action against the assailants because the law (yet again!) can't touch them. Too young, means at most a slap on the wrist. Our city has been plagued with a huge rash of car thefts by young offenders and the public outcry hit it's peak after a stolen car of boys aged 13 to 16 ran down a jogger on Wellington Cres. It's one thing to repeatedly steal cars, but now attempted murder is added to the game. Obviou

sly these kids treat the law as a joke with no clue of how their actions affect the lives of others and until they face some cold hard reality, they won't stop. If the police force's lackadaisical attitude towards young offenders continues, we shouldn't be surprised when citizen's start to take the law into their own hands. On the same day I talked to S, I watched a report on the news about a website that was letting it's viewer's express their anger towards crime in our city. The site Winnipegtheft.com had published the names of the youth that ran over the jogger (actually someone posted a news clip on YouTube that posted the names, the YouTube video is now unavailable), and technically since there is a law that prohibits the publication of the names of criminals under a certain age, the police are thinking about taking legal action. So I'm wondering, should we name all criminals no matter their age or at least name repeat offenders that didn't learn the first time? Try to guess which way I'm leaning? Let me know what you think.
Posted by binky at 12:43 AM 1 comment: 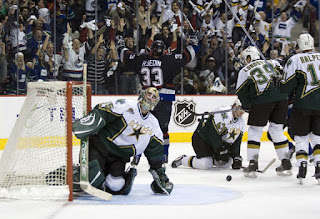 Did anyone watch all the Canucks/Stars game on Wednesday? This game ended at about the 18 minute mark of the Fourth overtime with the Canucks taking game 1. I ended up watching the 3rd and 4th overtimes in bed (I have a TV there), but drifted off just enough to miss the goal. When I opened my eyes at 4:00am CST, I saw Mansbridge reading the (old) news on the National. How can I dedicate watching 7 periods of hockey and then miss the overtime goal? It's like reading most of a mystery novel without finding out who did it cause the last pages are missing. Oh well, that's why they have highlights on the Sports News and for the modern fan, YouTube.

Got to warn you, I may talk about the Playoffs a lot on this blog, so if you have any predictions or observations thus far, please leave a comment. Also the Moose start their Playoff run next week..GO Moose!!
Posted by binky at 11:39 AM No comments:

I know this is a stupid post, but I found this in my Inbox:

To all viewers who contacted us about the movie WarGames
Please note that Programming has rescheduled the movie to air in its entirety on April 19, 9 pm ET: http://www.visiontv.ca/Programs/movies.html

Thank you for watching VisionTV 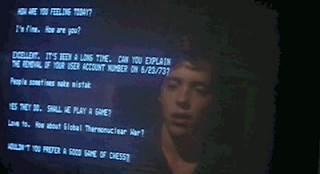 This is in reply from my January 30th posting about how VisionTV cut the last few minutes of that 80's classic WarGames. Yup, it's not groundbreaking news, but I thought you all should see this update. Kudos to VisionTV for listening, but unfortunately for them watching the Stanley Cup Playoffs is taking priority in my TV watching schedule for the next few months.

Canada vs US- Was There Any Doubt? 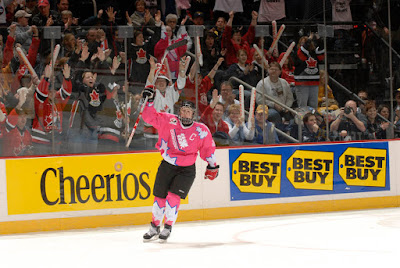 The Women's World Hockey Championship has been taking place here in Winnipeg for the past week and it all comes to a close Tuesday night with the Gold Medal game featuring Canada and the US, yet again. I went to the playoff round robin game between those two teams and it was without doubt the most exciting game I've seen this year at the MTS Centre. Canada won that game 5-4 in a shootout, it was a back and forth see-saw battle that should add to the fire for Tuesday's sold-out final. I hate to say this, bu

t Canada and the US are so dominant that they both have shutout all their other opponents, except when they've played each other (actually the US let in one goal against China 9-1), problem is that it leads to fairly boring one-sided hockey games. Maybe they should skip all the preliminaries and have just a Canada/US best of 7 final, I think that's what the people really want.

During the intermission at Saturday's Canada/US game, they brought out the 1990 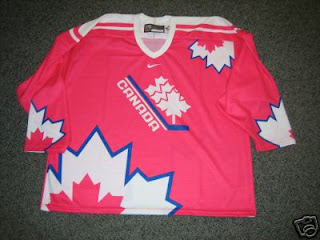 Gold Medal team (Vicky Sunohara is the only current Canadian player from that team) for a reunion to celebrate the first World Championship that was played in Ottawa. Back then Canada beat teams 17-0, 18-0, in the preliminary round (3 games) they out-scored their opposition 50-1. They went on to beat the US in the final 5-2. To commemorate this event the 2007 Canada team wore their original Pink style jerseys from 1990, I guess the idea back then is it had to be girly so Pink it was, it is now the much more intimidating 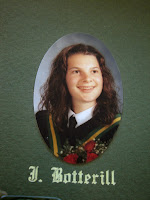 RED. If you want to own a game-worn jersey from that game, the individual player jersey's are up for auction from Hockey Canada on eBay.

For all you hometown Jennifer Botterill fans, I found her High School grad photo circa' 1997 from St. John's Ravenscourt, before she attended Harvard. She is definitely the best female hockey player to ever come out of Winnipeg.

Please, I Need A Laptop! 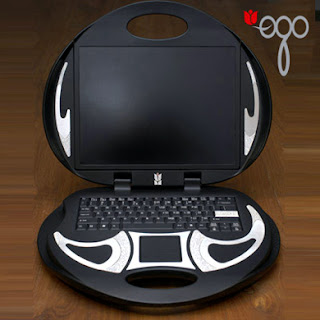 Sorry for the long hiatus, it was Spring Break, yet I didn't go to Mexico or Fort Lauderdale or take any time off work. My excuse, I got less computer time. Yes, the kid's have nothing better to do on their Spring Break except chat on MSN, check their e-mail's continuously, update their postings on Facebook/MySpace and play endless hours of computer (video) games. They stayed up later, which meant less time for my late night ramblings, I've gotten so tired waiting for a turn that I've been going to bed in record time.

One solution is portability. A laptop I could take into my room or take to a 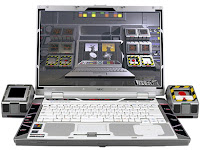 coffee shop or take to work (maybe not a good idea?), somewhere where I can write and post instantly instead of waiting until 2am. It doesn't need to be too fancy, some basic bells and whistles, the ability to still download and burn music would be good and I already have a external hard drive for extra space. Any donations or recommendations for a cheap laptop would be graciously appreciated.
Posted by binky at 12:22 AM No comments: