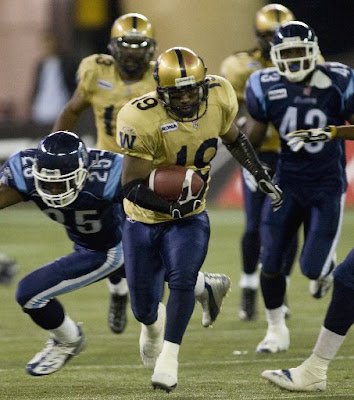 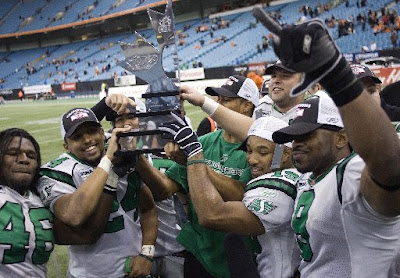 Grey Cup that is...! Yes, the match-up the league most feared, the Saskatchewan Roughriders and the Winnipeg Blue Bombers. The league was hoping for the East/West divisional leaders (and large market teams) to go head to head, but instead got the small market prairie rivals. You have to feel bad for the Toronto fans who had hoped for the hometown team to be in the big final...actually I take that back, Toronto..hahaha! I'm sure Bomber fans had a similar feeling last year when they hosted the Cup and failed to make the final, so it'll feel pretty good to have 60,000 fans on Sunday hating the B 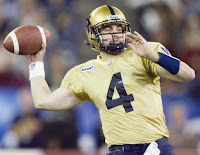 This will be the first ever Grey Cup meeting between the Riders and the Bombers in this the 95th classic, you have to remember the Bombers were in the West division for most of those 95 years when Ottawa was in the league. This should be a great game, at least the parties will be during Grey Cup week, despite dull Toronto fans being in a mournful mood. I'm sure there'll be tons of tickets on eBay from Torontonians trying to dump their tickets they so proudly scooped up a year ago when they went on sale in anticipation of their teams participation. There will be just as many people from Winnipeg and Saskatchewan that will be desperately seeking these prized tickets. The fans from Sask and Winnipeg love to party and there will be lots of people trekking to T.O. last minute.

This year promises to be an interesting Cup because: 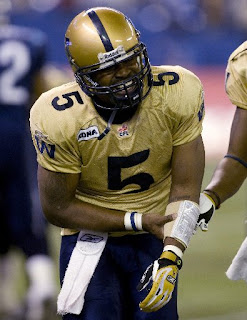 Though I don't take most of the stories in the Winnipeg Sun that seriously, this story caught my attention:

Kim Houle is still struggling to explain the harsh realities of discrimination to her children and grandchildren after their aboriginal dance group was turfed from a charity event's bill. 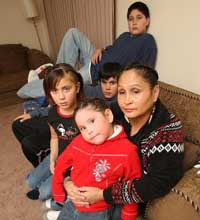 The 45-year-old mother of 10 moved into a Habitat for Humanity home in July and was asked to perform, along with eight of her kids and grandkids, at the organization's volunteer appreciation night, held Tuesday at the Church of the Rock in Fort Garry.

But as she was preparing to dress her kids and grandkids in traditional aboriginal garb Tuesday afternoon, Houle was informed they could not perform because their spiritual dance did not align with the church's policies.

"I was very angry, I was really hurt to have to explain to my kids that this prejudice is still going on," Houle said just hours after the invitation was abruptly revoked.

"Some people still think the old way, that we're basically dancing to the devil. That's what a lot of non-aboriginals thought and I guess still think our dance is about."

The Church of the Rock declined comment when contacted by Sun Media.

But Habitat for Humanity spokeswoman Michelle Nyhof confirmed Houle's invitation was "unfortunately" revoked at the demand of the church.

Nyhof said the organization regretted having to cancel the dance performance, but said not checking all performers with the church prior to the event was "an oversight" on Habitat's part.

Habitat signed an auditorium rental agreement allowing Church of the Rock first right of refusal on performers, and when it presented a performance list Tuesday afternoon, church administration said Houle's spiritual dance did not meet its policies.

Nyhof said administration did not elaborate on those policies, and confirmed Houle was the only performer slashed from the bill after Church of the Rock's review.

Houle does not fault Habitat. Instead, she says the church reminded her that aboriginal people are still not free from racism and prejudice -- and blames the church for forcing her to explain that to eight kids between one and 22 years old.

Habitat still invited Houle to attend the event, but she decided Tuesday night not to attend.

As the President of an organization whose mandate is human rights, I was particularly outraged when I read this. What exactly are the church's policies? Was it because they were aboriginal? Was it the spiritual dance itself, that perhaps it didn't share the same values and spiritual policies as the C.O.T.R.? Was it just a misunderstanding and scheduling conflict?

I suppose instead of jumping all over the church for it's actions, we should perhaps hear their side of the story. It never helps the situation when the accused declines comment, it immediately gives the impression they have something to hide or this in fact is the truth. I'm sure by tomorrow, the church's public relations staff will issue the standard damage control statements to defuse the situation. I browsed the Church Of The Rock's website earlier in the day, it said the usual inviting message of "we except all denomination's, multi-ethnic, all people....etc", but when I checked the link later around 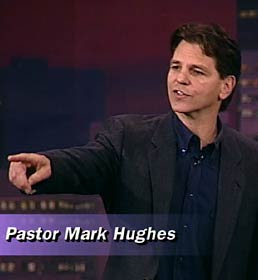 midnight (as I'm writing this) the site was down or removed...hmm.. sounds kind of suspicious, maybe they do have something to hide.

The church was created by pastor Mark Hughes and his wife and their church now occupies a large warehouse space in the McGillvary Industrial Park area of Winnipeg. A few weeks ago the University Of Manitoba used the church for their fall convocation during the worker's strike at the University. Are they sure the university weren't infringing on any of the church's policies for allowing any undesirables in their house of God or whatever. Last time I looked they allow aboriginals, gays and non-Christian's into university, so I'm surprised the Church didn't look over the graduate list for their "right to refusal". Any church that names itself after the wrestler Dwayne Johnson (aka: The Rock) can't be taken seriously, so in this day and age can this church be seriously that ignorant and racist....or at least until they tell us they're not.
Posted by binky at 7:17 PM 27 comments: