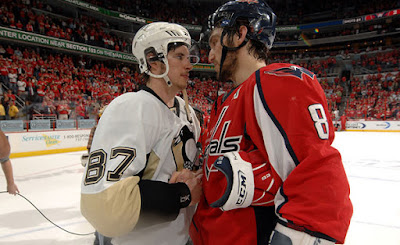 It's mid-May and we're finally down to the final four teams on their quest to be the 2008-09 Stanley Cup champions. This has been one of the best playoffs so far with amazing action and last minute drama. Last round all the series went at least 6 games with two series going the full seven and in those series' weren't decided until the last few minutes and in overtime.

Round 3
Eastern Conference finals
4. Pittsburgh Penguins (eliminated: Washington and Philadelphia)
6. Carolina Hurricanes (eliminated: Boston and New Jersey)
This is a battle between the Stanley Cup finalist from last year and the Cup champs from 2006. On paper this seems like a first round match-up with the sixth place Hurricanes probably tagged as underdogs. Again if you asked me two weeks ago if I thought Carolina would be a top 4 team, I would have thought it was a joke. In my predictions from the last two rounds I didn't choose Carolina not because I didn't think they had enough talent, but because I doubted their heart and intensity...they obviously disproved my doubts. All the talent they need is in goal with 2006 Conn Smythe winner, Cam Ward performing miracles and his clutch saves at critical moments have given the Hurricanes a chance to win in every game thus far. As I said earlier, if Cam Ward is on, the Hurricanes are on.

The Penguins on the other hand are riding Sidney Crosby's rise, this guy looks like he's on a mission to prove that he's not only the MVP in this league, but also the best player on his own team. Malkin has been kind of up and down so far, but was a more noticeable presence during the Washington series, which helps. It's just that when Crosby plays well, everyone around him plays better, kind of like a player that wore number 99, but I think Crosby's intensity and willingness to battle will rise this team into the finals.
Pittsburgh in 6 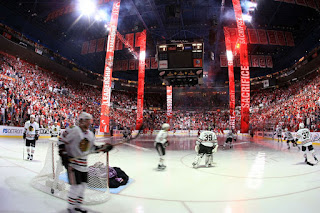 Western Conference finals
2. Detroit Red Wings (eliminated Anaheim and Columbus)
4. Chicago Blackhawks (eliminated Vancouver and Calgary)
What can be said about the Wings that hasn't been said already, they are the defending champs and they play like champs. Anaheim provided the Red Wings with their most challenging test this year and last. They took Detroit to seven games only to win in the final minutes with a questionable (but legal) goal that breathed a sigh of relief to Red Wing fans everywhere. I really thought the Ducks matched the Wings shift by shift and deserved a better result. The Ducks could have been the first team in recent memory that have beaten the top two seeds in their conference.

The Hawks were the first team to advance to this round and the upstart Hawks continue to surprise and amaze with their never-quit attitude that has won them many come from behind games in the first two rounds. Though the defence has been shaky at times and Nikolai Khabibulin hasn't had to be spectacular yet, Chicago has found a way to win even when their opponents have tried to intimidate and hit the smaller Hawks. Chicago's best hope is that they don't take too many penalties and they don't trail the Wings early because Detroit will not blow leads like Vancouver did. Goaltending will be key, so Khabby better play like he did against the Wings in the Jet's last season and when he anchored Tampa Bay in their Cup victory. Though my heart is with Chicago, logic says Detroit is just too good to lose...but this year's playoffs have been anything but logical!
Chicago in 7
My series record so far: 9-3
Posted by binky at 1:04 PM 2 comments: 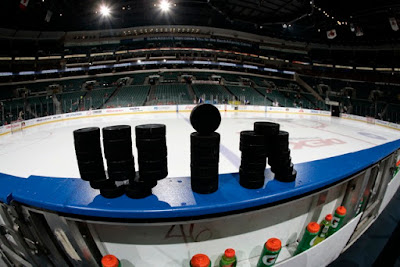 I know we're already 1 or 2 games into the second round, but I still want to give my psychic mind a challenge. All my predictions except for the New Jersey/Carolina series were correct. Even then, NJ was a minute and a half way from clinching the series until they gave up the tying and then the winning goal with about 30 seconds left in the third to blow the series. Incredible!
I actually wrote down what I thought the outcomes for round two would be before the start of the series', unfortunately I watched the first one or two games so I might have to reconsider, but I'll keep to my original guesses. 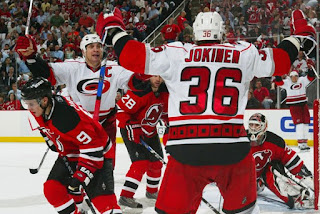 Round 2
Eastern Conference semi-finals
Boston vs Carolina
The Bruins easily blew away the Canadians first round while the Hurricanes squeaked by the Devils in game seven in the last minute. All indications is that Boston should have a easy time, but the never give up effort by Carolina (winning goal in .02 seconds and game 7's last minute win) has me thinking this series will be longer than most people think. If Cam Ward continues to amaze this could be an upset, but I doubt it.
Boston in 6

Washington vs Pittsburgh
This is the match-up the league and fans are drooling about, Crosby and Malkin versus Ovechkin and Semin/Backstrom and Green. The Caps are riding on a rookie goalie and they won 3 straight after trailing the Rangers 3-1, me thinks the Caps have awoken and will be tough to beat. Crosby has been on fire and I think he has something to prove, this series will be about leadership and lots of goals. So sit back and enjoy, this could be the best series of the playoffs and it will come down to game 7... let's only hope!
Pittsburgh in 7 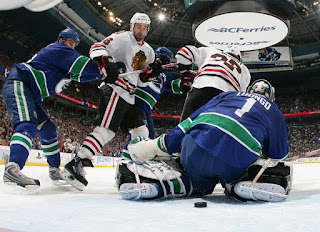 Western Conference
Detroit vs Anaheim
As predicted the Ducks knocked off the President's Trophy winners this year, San Jose and they hope to do the same against the Wings. I don't know whats wrong with the Sharks? Thornton sucked, Marleau was non-existant, and Nabakov was very shaky. A new coach, revamped defence and a first place finish is good for the regular season, but the playoffs is a totally different game. Anaheim's top line of Getzlaf, Perry and Ryan totally destroyed the Sharks everytime they were on the ice, and rookie Jonas Hiller completely outplayed the vet, Nabakov.
The Wings had an easy series against Columbus, but they'll have their hands full with the Ducks. This is the Detroit Red Wings though, the defending Cup champs and they have some kind of magic that always gives them the edge in a tight hockey game. It will be tough, it will be grinding and if Anaheim pulls another upset, I won't be too shocked.
Anaheim in 6

Vancouver vs Chicago
Much like the Calgary/Chicago series, I'm torn about who to cheer for. The Hawks are my team, always have been always will be, but Vancouver is the last Canadian team and they are the parent club of our hometown Moose. Wouldn't it be great if both the Moose and the Canucks can win their league championships! Something about the Canucks bugs me though, maybe it's greedy cup/money hungry Matts Sundin (I wish the worst for you Matts!), maybe it's the Sedin's who seem to disappear when it matters. I've never loved the Canucks, I like them and cheer for them, but it doesn't feel right. In the first round they played it almost perfectly, they shut down St. Louis's powerplay, they beat Mason consistantly, the Sedin's appeared and most important of all Luongo was their best player every game. The bottom line is if he's not at his best the Canucks will NOT beat Chicago!
The Hawks are young and enthusiastic with scoring from all 4 lines and don't rely completely on their goaltender. Khabby was very solid against Calgary, but I think the difference against Calgary was more that Kiprusoff was tired and unspectacular and if Luongo plays like that Chicago has a really good chance to advance.
Chicago in 6