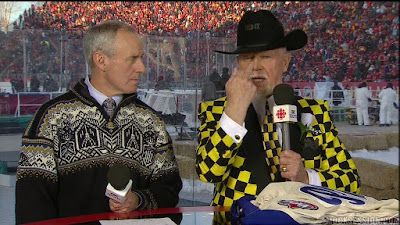 Sorry for the lack of posts recently. I've been trying to develop a website for my work and maybe if that goes well, I might make another personal page...we'll see!

Anyways, one item that got my attention was Coach's Corner between the 1st and 2nd period of the NHL Heritage Classic between the Montreal Canadians and the Calgary Flames. The issue was the rumour that the Atlanta Thrashers might relocate and Don Cherry weighed in on the subject and boldly guaranteed that the NHL will return to Winnipeg. He acknowledged first that Quebec City would eventually get a team after they build a new arena, but Cherry feels Winnipeg is the next team to get a franchise and the size of the MTS Centre should not be an issue. Of course I'm skeptical, talk of an NHL team here is old news with the whole Phoenix Coyotes debacle, but there is renewed hope because of the unstable franchise in Atlanta. This must be a blow to to Atlanta since this is the second time around for this city (remember the Atlanta Flames!) and as much as the NHL would like to have a team in the heart of Georgia, it has failed miserably. Eventually the deep thinkers of the NHL will realize hockey is not the top attraction (or even in the top 5) in the south part of the U.S.

I would like to see an NHL team here as much as the next hockey fan in Winnipeg, but first a few things need to happen. Cherry feels we have enough seats, maybe add a few thousand more, but in reality what we lack is more corporate luxury boxes. I've been a some other rinks in the league and they have at least two levels of boxes while the MTS Centre only has one with only 48 suites. By comparison, the Bell Centre has 148 private boxes and Scotiabank Place has 147, there's a lot of guaranteed revenue in the boxes alone. Will Winnipeg have a large enough corporate support (or rich people) to sustain a NHL team and will fans be willing to put out at least 4x the money for a ticket than for the AHL? We need to fill the rink consistantly for more than games against the top drawing teams (Pens, Caps, Wings, Hawks, Habs etc.) compared to the lame duck attractions (Islanders, Panthers, Blue Jackets etc.).

As Don Cherry reminds us, he is never wrong!... judge for yourself. Watch the clip from Coach's Corner starting at 1:14, when he guarantees Winnipeg's return!
Posted by binky at 5:08 PM 2 comments: