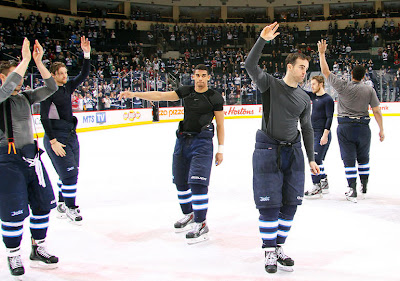 Yes, school's out kids, the season's over for the players of the Winnipeg Jets and their fans can look forward to a summer of changes to improve this team for next season. If the Jets want to rise up to a higher level, especially in a new divison/conference, many changes need to take place over the summer to keep up with teams like the Hawks, Wild, Predators and Blues.

So, here we have the 2012-13 edition of the players "report card" and my opinions about their on ice performance. Of course, I'm not a (paid) expert and all my comments and grading system is for entertainment purposes only, so if I hurt a player's feelings, I'm sorry. But, if you're making in excess of a million dollars and you don't deliver your expectations, you attract criticism and a reality check. I've never given a failing grade to anyone before, but this year was close.
(listed is name: games played-goals-assists-points)

Forwards-
NIK ANTROPOV:  40-6-12-18
Another underachieving season for the 4.75 million dollar man. Don't want to say he's totally useless to the Jets, but it's pretty damn close. Had a couple of effective games (shifts?) all season, but I can guarantee he will not be back next year (unrestricted free agent), if he is, the Jets are insane!
Grade: D+

ALEXANDER BURMISTROV:  44-4-6-10
He's my finalist for most disappointing player of the year. He's shown flashes of his talent the last two seasons in Winnipeg, but must play to a higher level to stay on this team. What, even Hainsey had more points than Burmistrov! He may have worn out his welcome with Noel and was given many opportunities on the second and third line to prove he belongs. If he's relegated to the fourth line, his talent is wasted.
Grade: C+

EVANDER KANE:  48-17-16-33
He has the tools and skills to be a premier winger in this league. When he's on, he dominates games and often single-handedly creates chances. If only he had linemates that can keep up with him and feed him the puck. The Jets priority this summer is to find Kane a suitable and capable centre. He will be a legitimate superstar in this league!
Grade: A

ANDREW LADD:  48-18-28-46
Without a doubt, Ladd was the Jets MVP this season. Game in and game out, no one played as consistantly and competitively as Ladd. The line of Little, Ladd and Wheeler were amongst the top lines in the league and Andrew Ladd even cracked the top 20 scorers in the league. The captain truly led by example, too bad he didn't have many followers.
Grade: A+

BRYAN LITTLE:  48-7-25-32
As centre of the team's top line, he did his job as a playmaker as his other two linemates led the team in goal scoring. The downside is the team didn't get much goal production up the middle with a combined 22 goals between the 5 regular centres. The team still needs more production from it's top centre or at least a second line centre that can close the gaping hole up the middle.
Grade: B+

JIM SLATER:  26-1-1-2
Last year, Slater was an effective third line checking centre as part of the GST line. Glass left for Pittsburgh, Thorburn hung in the lineup on the fourth line, while Slater missed more than half the season with an injury. Though he only had two points, his absence was noticeable in the faceoff circle. Slater's effectiveness for critical faceoffs left the Jets without their best faceoff man.
Grade: C

CHRIS THORBURN:  42-2-2-4
With his role substancially reduced from last season, Thorburn stayed in the lineup for his toughness. Without a regular enforcer in the lineup, Thorburn accepted this role and played it well. Always willing to stand up for his teammates, he may be around next year if the Jets don't fill that position.
Grade: C

KYLE WELLWOOD:  39-6-9-15
Unrestricted free agent, I'd be surprised if they re-sign him. Ineffective and unproductive, he showed flashes of his above average skill level. Too little, too late.
Grade: C-

BLAKE WHEELER:  48-19-22-41
Has shown improvement every year and this was his best. It's a shame the team didn't make the playoffs as Wheeler, a power forward is best suited for playoff action. The last two years he's started slow, but got better as the season wore on and played his best hockey when the games began to matter more.
Grade: A+

ANTTI MIETTINEN:  22-3-2-5
Another free agent that won't be back. Similarly to Wellwood, Miettinen was benched for multiple games for his lacklustre play and returned for a couple decent games. Between Antropov, Wellwood and Miettinen the Jets could have saved amost 8 mil this year if they weren't here.
Grade: C-

OLLI JOKINEN:  45-7-7-14
The biggest disappointment this year was the performance of Olli Jokinen. When he signed last summer, the expectations were high with the hopes he would be the team's top centre and hopefully be Kane's setup man. Well, that plan fell through! Brutal numbers for a 4.5 mil signing and if he's such a great two-way player, what's with the team's worst -19 rating. Will any team trade us for him?? Maybe Calgary?
Grade: D

ANTHONY PELUSO:  5-0-2-2
If his role is to take penalities and fight, he filled that role. But, if you get injured (out for the season) during a fight after only 5 games, you're failed that role. Seriously, I think he had more penality minutes than actual ice time minutes. He might be back for the simple reason the Jets are apparently desperate to keep a "tough-guy" on the roster, plus he may have saved Zach Raymond's life.
Grade: C

JAMES WRIGHT:  38-2-3-5
Not much wrong with Wright, but a lot more offensive production would be appreciated. His spirited play deserved a better result, but he won't be much more than a fourth or possibly third line player on this team.
Grade: C

ERIC TANGRADI:  36-1-3-4
Didn't really do much until he lined up with Burmistrov and Santorelli late in the season. The line was effective forecheckers and created some good chances, but it didn't translate to many goals. Another disposable player that may or may not be back.
Grade: C

AARON GAGNON:  10-3-0-3
Called up for the last 10 games of the season and contributed 3 goals with very limited ice time. Seemed to fill the fourth line centre position as good as anyone. Was effective and deserves a closer look next season.
Grade: C+

MIKE SANTORELLI:  10-0-1-1
Claimed off waivers around the trade deadline and despite his none existent offensive stats, he played well. Primarily a checking forward, he could find a spot on the third line next year if the Jets decide to re-sign him.
Grade: C+

Defence-
ZACH BOGOSIAN:  33-5-9-14
A priority this summer is to re-sign Zach, not for a season or two, but long term. He is in my opinion the team's best defenseman and he took giant steps to prove it this year. He began the season still recovering from a wrist injury from last year and ended the season with a concussion. If he stays healthy, he can be an elite defenseman in this league, if he isn't already.
Grade: A

DUSTIN BYFUGLIEN:  43-8-20-28
Some nights Buff can be a physical and offensive force that dominates everyone on the ice. His upside is the big shot, the big hits and intimidating style that makes him effective. Unfortunately, there were too many nights he wasn't, with a too many miscues and lackadaisical play. Is he a benefit to this team or is he a hazard? It's frustrating as a fan and must drive the coaching staff crazy.
Grade: B-

TOBIAS ENSTROM:  22-4-11-15
Missed more games than played, it's no wonder the Jets powerplay was the leagues worst. He is the quarterback of the powerplay and it hurt bad not having Enstrom in the lineup for long periods of time twice. The team should be concerned about his durability and the team was lucky Bogosian suited up for his first game the same night Enstrom got injured (the first time). I don't think Buff, Bogosian and Enstrom were in the lineup at the same time all season.
Grade: B-

RON HAINSEY:  47-0-13-13
Kind of surprised Hainsey didn't get traded at the trade deadline. He becomes a free agent this summer and I'm thinking the team will probably part ways. He's still prone to at least a couple giveaways a game and at times has struggled. The Jets are knee deep in defenseman and though Hainsey was durable this season, it's time to step aside and give some of the kid's an opportunity.
Grade: C

MARK STUART:  42-2-2-4
Steady and reliable. Not expected to contribute offensively, he is strictly a defensive defenseman. Tough and willing to stand up to anyone, a underrated and useful player. Every team needs a player like him.
Grade: B-

GRANT CLITSOME:  44-4-12-16
I had my doubts he would stay with the team, but surprisingly he was one of their steadiest defenseman. Believe it or not, Clitsome was the second top scoring defenseman on the team and he would be worthwhile to re-sign in the off-season.
Grade: B

PAUL POSTMA:  34-4-5-9
He's a presence on the blueline, he's got size, a big shot and showed he can play the powerplay. Not quite a top 4 defenseman, but he has good potential.
Grade: C+

DEREK MEECH:  16-0-1-1
Got into the lineup because of the injuries on defense and proved to be effective and steady.  Not much to complain about, but will be hard pressed to make the lineup next year, especially with Trouba expected to make the team.
Grade: C

ZACH REDMOND:  8-1-3-4
A serious slice to the back of Redmond's leg in practice cut short his season. It was season ending, but could have been life threating if it wasn't for some quick thinking teammates and staff. His play was fine, nothing spectacular, but he wasn't a bad either. His inspiring return to the ice showed the type of character and dedication he has for the game.
Grade: B-

Goal-
ONDREJ PAVELEC: 44 games played- 21 wins-20 loses- 2.80 GAA- .905 SV%
At times, the team won games because of Pavelec. He was nothing short of spectacular down the stretch, but he also was very average when the team sunk during their losing steaks. He deserves some consideration for team MVP as he carried this team when they're failure to score goals hurt them. This team gave up way more goals than they scored, the teams that made the playoffs didn't.
Grade: B+

AL MONTOYA:  7-3-1-2.90-.899
He really get much opportunity to show what he can do and when he got a win and got the start the following game, he suffered an injury that killed his chance for more work.  As a backup you're expected to be ready for maybe 25% of the starts, but unfortunately for Montoya, Pavelec was a workhorse that plays better with more starts. Montoya may need to move on if he wants more action.
Grade: B-
Posted by binky at 12:00 AM No comments: