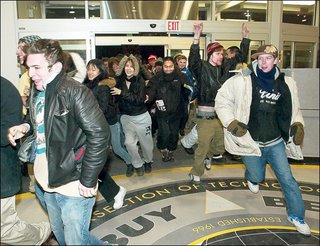 So Christmas is over, but the rush to the Mall has just begun...for real! The week before Christmas is suppose to be the time when desperate Men frantically jam the shopping establishments to over-buy and over-pay. I always get lots of flack for waiting to the last minute, but this year I actually didn't leave the house on December 24th. On Saturday evening, I was at the Fork's and McNally Bookseller's, but these were just minor "stocking stuffer type" items.

In Winnipeg, (I'm assuming that other cities' residents are just as stupid) there is one big shopping day, Boxing Day! The major electronic and furniture store's open at 7:00am and hardcore bargain hunter's camp out the night before just so they can save a couple of bucks. One furniture store (which I won't name, to give it more free advertising), every year offers 99% off one selected item in it's store ($18.49 for a $1849.00 table), this store always garnishes press in the first couple of pages of the paper and it's "lucky"camper get'

s his name in the paper. One goof and his friends showed up at Best Buy at 8:30pm Christmas Day to be first in line (about 1,000 people were waiting when doors opened), he calculated that spending the night in the parking lot he saved about a grand on a laptop computer and a stereo system. "It was a good night's work, for a 10-hour shift, I made $1000", he figured. First of all he didn't make $1,000, he probably spend $3,000, and he just saved money on products that B.B. most wants to get rid of before year-end and the most discounted items seem to be the demos and reconditioned. 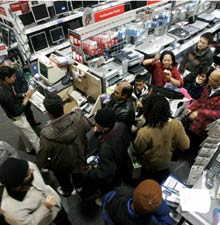 ay and the Mall as expected was still packed and uncomfortably crowded. The deals just don't justify digging through piles of clothes under the watchful eye of store security, in reality I spent most of my money and ran the ol' Visa up to heights it has never reached previously. It was estimated over 191,00 Manitoban's were looking for bargains on Boxing Day and according to Visa Canada, sales rang in at $44 million. The credit-card company expected six million Canadians to spend $1.9 billion on Boxing Day, with almost 60% still looking for Christmas presents, the average shopper will spend $319. Our society has this greed mentality where we project this perception of giving and generosity at Christmas, but as soon as Christmas is over we have this need to run out and spend on ourselves, all the shit we didn't get that WE WANTED! Enjoy!
Posted by binky at 11:22 PM No comments: