Crushes & Carnage- Roller Derby Is Back!!

My first exposure to roller derby was back in the late 70's when professional roller derby was on television and it's theatrics and antics mirrored the entertainment level of professional wrestling. Two teams battled it out on a raised, banked track surrounded by metal guard rails that concentrated more on the violence and wildly colourful characters than the sport itself. This was sports entertainment at it's lowest, staged fights and exaggerated battles, but it should be remembered that these players were in fact skilled athletes that were participating in a sport. Then one day roller derby seemed to fizzle out and disappear while professional wrestling became even more popular, maybe roller derby was too dangerous and there were too many real injuries. Roller derby enjoyed a bit of a revival on the early 90's with made-for TV "games" such as Rollergames and Rollerjam, but that too burned out. 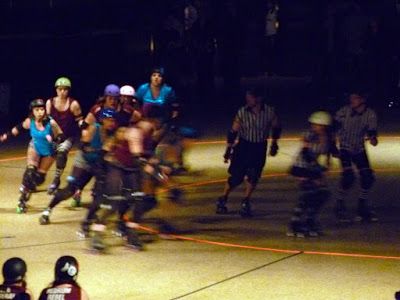 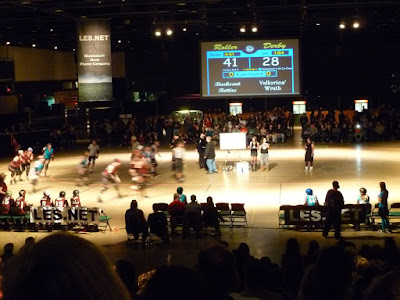 Fast forward to November 13, 2010 when I attended my first live Roller derby match at the Convention Centre, appropriately named; Crushes & Carnage. The game is enjoying another revival, but this time it's different. The leagues and teams are more of a grassroots DIY operation focusing more on the the sport and athleticism and the sport is dominated by woman's teams. The Winnipeg Roller Derby League consists of 3 home teams, The Backseat Betties, Valkyrie's Wrath and the Corporation, as well as a travel team, The Murder City Maidens (that represents the WRDL) that competes against out of town teams. 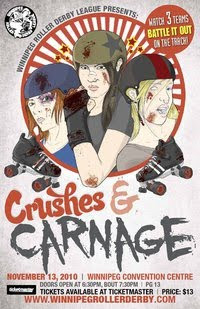 Here are some other tidbits/antidotes I picked up watching "Crushes & Carnage": 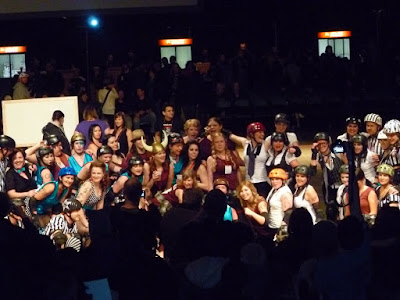 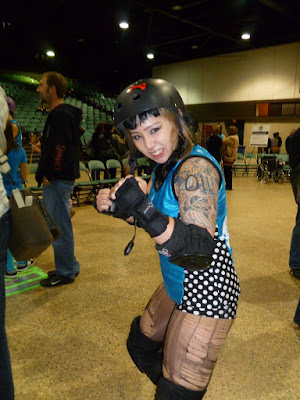 Crushes and Carnage was a lot of fun and I'll definitely have to go to the next roller derby event. Admittedly, I might not have even heard about this if it wasn't for my friend (and my hair stylist!), Mini Morbid who is on one of the teams, The Backseat Betties. M.M. was awesome and you really see a different side of someone when they are competing on a sports team. Knowing someone involved helps, but it's still an entertaining evening of great sports action and the price is right. It's less than a Moose ticket and at least half the price of a Bomber game...and yes, there's beer!
Posted by binky at 11:41 PM 1 comment:

In Case You Missed It... 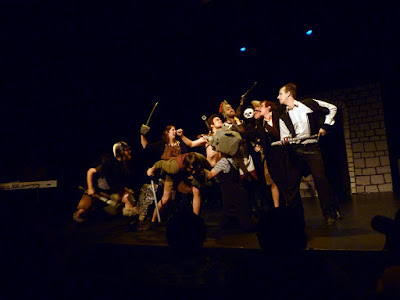 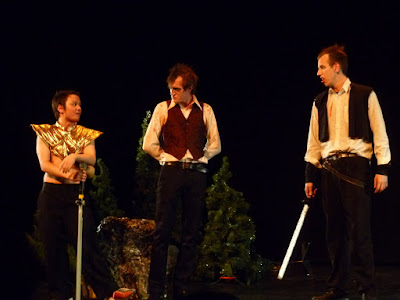 ...The annual IF...Improv Festival was held at the Gas Station Theatre with performers from Los Angeles, New york, Toronto, Edmonton, Regina and of course, Winnipeg. This year on November 11, a return of the Dungeons and Dragons improv show that performed it's hit show at this year's Winnipeg Fringe Festival. This was a one-off, 2 hour show that featured a return of old favourite and new characters performed by the same cast as the summer run. Even though I was never a "gamer" or really have a grasp of the whole D'n'D thing, this improv show is always entertaining and of course, unpredictable! This excellent cast works well together with everyone contributing equally without a lead star of the show, which ultimately contributes to the success of the appeal and longevity of the series. The summer's shows worked like a serial, where the mini-episodes continued from show to show leading to a larger and more in depth storyline. This show had quite the following!! Supposedly this might be the end of the series, but here's to hoping there is more, or at least something else with this ensemble cast. 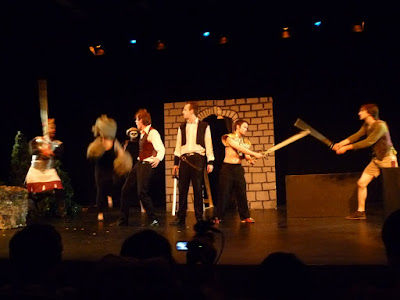 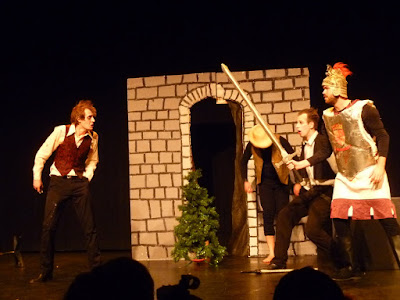 Here's a short video of the last song R-Kayne (Jesse) sings while he is dying. I noticed there was 2 video cameras filming the festivities, so look out for a video of the complete show. I'll post a link when it appears. By the way, R-Kayne was selling CD's in the lobby after the show that he, Leif, Sam and Colin wrote and performed. The 4-song CD called, 16 Tops is quite hilarious and a excellent parody of the over-used auto-tune tool that seems to be popular with the kids nowadays. If you're interested, it's available for sale for $5, let me know and I'll talk to R-Kayne about getting you a copy.
Posted by binky at 11:10 PM No comments: