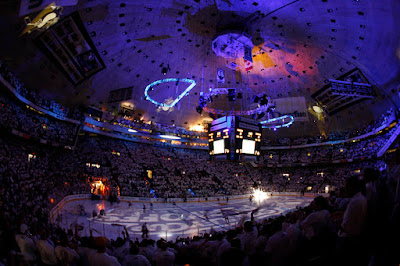 It's that time of year again, for the next month or two it's pretty much guaranteed I'll be in front of the television watching CBC and/or TSN for the 2010 edition of the NHL playoffs. I don't have time to give my full analysis of each series because I'm watching some games right now, so to be brief, here's my picks for the first round.

EASTERN CONFERENCE
Washington (1) vs Montreal (8)
Doesn't look good for the Habs, but goaltending is key. Could be a blowup, but who knows? Still I can't see the Caps losing this series.
Washington in 6

New Jersey (2) vs Philadelphia (7)
Despite being #2 and 7 seed's, this series will be close. Regardless, if Philly is considered the underdog this will be an upset. Sorry Marty!
Philadelphia in 7

Buffalo (3) vs Boston (6)
What happened to the Bruins this year? Contenders last year, pretenders this year. Complete reverse for the Sabres, who are back in the playoffs. Should be low scoring and probably a snoozer. Without Savard, Boston may never score on Miller.
Buffalo in 5

Pittsburgh (4) vs Ottawa (5)
A surprisingly good season for the Sens, it's too bad they have to play the defending Cup champs for the first round. The Pens have been inconsistent this year, but will find their game at some point during round one...?
Pittsburgh in 6

WESTERN CONFERENCE
San Jose (1) vs Colorado (8)
As usual the Sharks have cruised at the top of the standings. A completely revamped line-up (except for the keys) hold promise of a Cup, but if recent playoff history matters, they are ripe for an upset. The Avs only has a few names I still recognize, there's no way they'll beat the top seed...or will they?
Colorado in 7

Chicago (2) vs Nashville (7)
I love the Hawks, always have and always will. The Hawks had one of their best regular seasons ever. So, this is easy, the Hawks WILL be in the Cup finals!
Chicago in 5

Vancouver (3) vs L.A. (6)
Never really sure about the Canucks, they have a history of underachieving, but this year the team has more depth than ever (in recent memory). I know next to nothing about the Kings.
Vancouver in 5

Phoenix (4) vs Detroit (5)
The Coyotes were the feel-good story this year and their first appearance in the playoffs in what...8 years or something? These ex-Jets have the unfortunate pleasure of meeting the hottest team in the second half of the season. This will be a close series, but in some ways it will be an upset no matter who wins.
Detroit in 7
Posted by binky at 11:54 PM 3 comments:

Stuff I See Outside My Window (At Work) 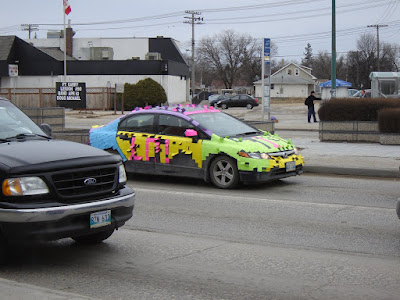 Anyone have any idea what's with this?

Seems to be a car covered in sticky-notes, but why? Is it some sort of advertising? Is it an April Fool's joke? Does it say something? Is it art?...Or is it just someone trying to bring a smile to everyone's face?

Whatever it is, it sure got everyone's attention at the stop light...and it brought a smile to my face! Happy April!
Posted by binky at 12:33 AM 1 comment: