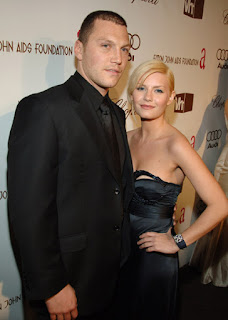 More proof that Sean Avery is a slime on and off the ice. Everyone remembers the on-ice incident with Martin Brodeur during last Spring's NHL playoffs, now the "classy" Avery made these off-ice boneheaded comments:

The league says the Dallas Stars winger, who is known as a pest for being an agitator on the ice, made inappropriate comments not pertaining to hockey on Tuesday.
In Calgary for a game, Avery made a public comment that seemed to be directed at Flames defenceman Dion Phaneuf, who is now dating a Canadian actress who once dated Avery.
"I'm really happy to be back in Calgary. I love Canada," Avery said in front of cameras. "I just want to comment on how it's become like a common thing in the NHL for guys to fall in love with my sloppy seconds. I don't know what that's about, but enjoy the game tonight."
Phaneuf is dating Elisha Cuthbert, who is best known for her role on the television series, 24. She dated Avery until the summer of 2007.
Stars management issued a statement saying the club supported the NHL's decision and would have suspended Avery if the league had not.
The ban is indefinite pending a hearing with commissioner Gary Bettman.

It Seems Avery really likes to revel in the spotlight he receives when he shoots his mouth off. He has this NBA/NFL trash talk mentality with little or no respect for the integrity for the game. Glad to see the Stars have supported the leagues decision, I've read that many of his teammates in Dallas have a real hate-on for Avery. According to the article, a poll of 66 % of NHL players chose Avery as the most hated player in the league.
Posted by binky at 6:43 PM 1 comment: