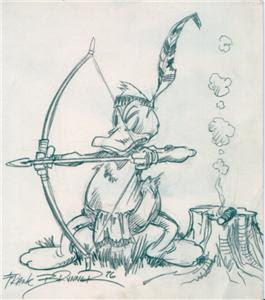 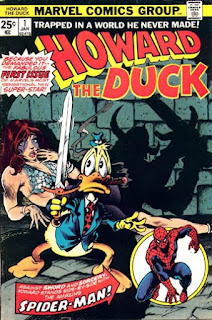 Back in my heyday of comic collecting (mid-late 70's), I was more interested in the artists that created the art than the investment value of first appearances, origin issues and #1 editions. I amassed an impressive collection of Amazing Spiderman's and pretty much any title in the Marvel catalogue at that time. One phenomenon from 1976 was the comic book, Howard The Duck that caught the attention of collectors with it's fowl-mouthed "man-duck", Howard, who smoked cigars and had a lovely sidekick, Bev. This comic was intriguing because at the time most of the Marvel line-up was your standard superhero types who fought bad guys, but Howard was a bit of an anti-hero fighting ordinary, often bizarre characters in odd offbeat situations...Kidney Woman, Space Turnip, rock band Kiss, a presidential campaign, Son of Satan, and the Defenders were just some of the silly plot lines. Actually the comic started out promising, but eventually it got too stupid and badly illustrated and then that awful, horrible movie! Definitely killed the buzz! Howard The Duck originally spun-off from Fear #19 in a Man-Thing story, somehow through this Howard got his own book.

Anyways, the catch for me was the art for the first two issues by Frank Brunner. Brunner was known as a fabulously detailed fantasy artist who was best known for illustrating issues of Doctor Strange and Man-Thing. I once met Brunner at a comic con in Calgary in the 70's (I have no idea what year?) and he signed a print of his "Scarface Duck" and briefly chatted about comics, very cool! I bring up all this comic talk because I recently purchased an original drawing by Frank Brunner (see top photo) from eBay. I occasionally browse eBay as I dream of owning some original comic art, but for now this is all I can afford. I think this is a nice piece because, though it's just a sketch, it is well detailed and it was drawn (1976) during Brunner's height of success with Marvel and not at a recent comic con. Now about framing?
Posted by binky at 11:38 PM No comments:

I voted early, 9:00am to be exact a mere half and hour after polls in Manitoba opened. I always beat the rush because after 4pm the after school and work crowd fill the gymnasium and you know, I have better things to do than wait in lines. I cannot stress this enough...VOTE! I can't stand it when fortunate citizen's like ourselves, that have our democratic to vote, don't. If you don't vote you have no right to whine and complain about the GST or Harper, at least if you do your duty and vote, you should feel you at least tried to make a difference.

On the radio the other day they we're talking about the problem of the 18-24 age category how they are 20% less likely to vote. Would online voting make a difference? It couldn't hurt, a lot of TV shows (American/Canadian Idol), use the online voting format and we file our taxes all online. I predict that Elections Canada will institute a way to help battle this voter apathy and online voting seems obvious.

I've never had such a hate-on with a party and leader like I do with Stephen Harper and the Conservatives. This arrogant a-hole is so out of touch with real Canadians that I wonder why he is so popular, must be the same reason George Bush kept getting re-elected. It was Harper that instituted the law of a set election date, right? In Winnipeg, "star" candidates such as Thomas Steen and Trevor Kennard, who are rookie politicians, but local sports celebrities have been silenced by not appearing at candidates debates. Harper's such a control freak, he doesn't even trust his own cabinet never mind his candidates. Aren't you curious to hear what Steen has to say about carbon emissions or the woeful performance of the Canadian dollar? This is a candidate who on his website lists his hockey stats from his playing days...the PC's can't be serious? Do they think we're that stupid? We shall see. Harper's wife Lauren seems like a reasonable person, but how can she lay down beside a slimy weasel like her husband each night and not feel somewhat dirty and guilty? Makes me cringe at the thought!

Anyways, get out and vote, I know the Conservatives will probably lead again, but with enough thoughtful voting we can at least prevent a majority government...maybe?
Posted by binky at 12:11 PM 2 comments: 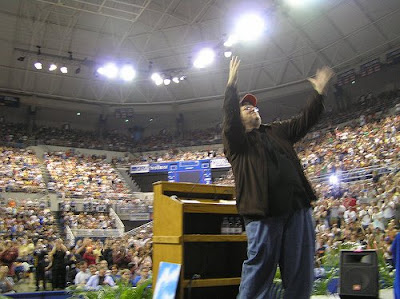 Despite the title, Slacker Uprising is not my autobiography, but it's Michael Moore's latest film. Moore's film is the first time a major motion picture is being offered for free download on the internet and he says he is doing it for two reasons: 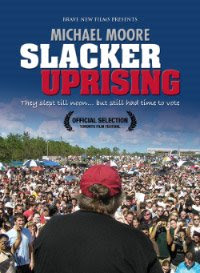 "I'm giving you my blanket permission to not only download it, but also to email it, burn it, and share it with anyone and everyone (in the U.S. and Canada only). I want you to use 'Slacker Uprising' in any way you see fit to help with the election or to do the work that you do in your community. You can show my film in your local theater, your high school classroom, your college auditorium, your church, union hall or community center. You can have your friends and neighbors over to the house for a viewing. You can broadcast it on TV, on cable access, on regular channels or on the web. It's completely free -- I don't want to see a dime from this. And if you want, you can charge admission or ask for a donation if it's to raise money for a candidate, a voter drive, or for any non-profit or educational purpose. In other words -- it's yours!"
- Michael Moore
This is pretty cool, I haven't watched it yet, I'll get around to it later this week, but the issues and relevance of the young people vote (or lack of) are just as important here as it is across the border. Anyways, watch it and comment, I would love to he what you think.

Since my pal Maruad is probably expecting me to write about the new Hockey Night In Canada anthem, here it is! When I saw the "10 finalists" program, I had a feeling this one would get chosen. There seemed to be sameness in all the finalists, I'm sure that was aided by the orchestration of all the themes that transformed the original entries. A kind of Celtic meets Dallas theme, it has a dated 80's TV show theme feel to it, which unfortunately I don't think hockey when I hear it and I've never been a fan of any song with bagpipes. I must admit I wasn't that interested in CBC's anthem challege contest (I only listened to a handful of entries on the website, as some entries really really sucked!) and every time I hear this theme when I watch HNIC, I'll be thinking, "reality TV-show" winner...I guess that will be good for Colin Oberst and his 100k. Boy, I regret my laziness I should have entered!

Last month (September 19-21), I went to Vancouver for the 20th anniversary celebration of the Redress agreement. At this national celebration, interested participants we're treated to panel discussions, workshops and of course a gala Japanese dinner. One of the workshops discussed Japanese-Canadian identity for youth, since JC's have the highest rate of inter-marriage. Guest presenter, Jeff Chiba Stearns 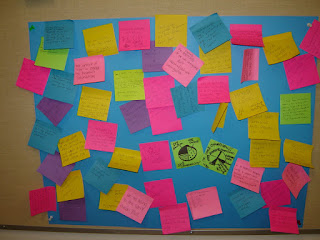 began the workshop by screening his two films, What Are you Anyways? and his newest film, Yellow Sticky Notes. Both films are a worthwhile watch and I thought it would be cool to share YSN here. If you like what you see, be sure to purchase a copy from Jeff, as the DVD has some bonus features.

The workshop itself asked it's participants to write, on coloured sticky notes, random thoughts and feelings toward their heritage and identity. It should be noted there was a good mix of young, old, half/full Japanese Canadian and non-JC's. Very interesting and quite unique, it really made you think. Special thanks to Jeff and coordinator Caitlin Ohama-Darcus.