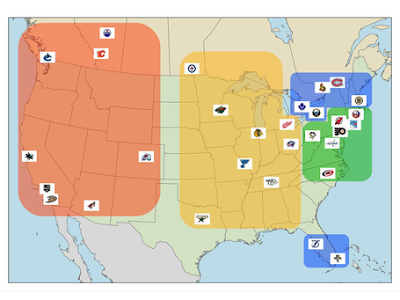 Welcome back to Sick Puppy after an extended hiatus. We're back in action, hopefully better than ever and hopefully with more posts in the future. My return was prompted by some breaking NHL news and I thought this would be an appropriate time to return to the blogisphere.

The NHL Board of Governors met on Monday to approve a realignment plan that would eliminate the two conferences, six division format and replace it with four conferences determined more by geographic location and time-zones. Of course, this radical move was precipitated by the Atlanta Thrashers relocation to Winnipeg and Detroit's constant whining about moving to the Eastern Conference so they didn't have to play so many games out of their time-zone. Two of the conferences will have eight teams, while the other two will consist of seven teams. This realignment will mean our Jets will be in a division with Chicago, Detroit, Nashville, Columbus, Dallas, Minnesota, and St. Louis. This will create a natural rivalry with the closest cities such as Minnesota and Chicago and if you recall during the last season (1995-96) of the original Jets, they also shared a division with Detroit, Chicago, St. Louis and Dallas.

The top four teams from each conference will qualify for the playoffs. The first-place team will play the fourth-place team in the conference and the second plays the third. The four conference champions will meet in the third round with the winners meeting in the Stanley Cup finals. Not sure yet how the seeding of the third round is determined or if it will still be a "West vs East" type format, as well the conferences have yet to be named.

My initial response is that this setup should satisfy fans that want to see all the teams visit in one season. Seemed kind of crazy playing the teams in their own division and conference so many times without seeing a quarter of the teams in the present unbalanced schedule. I love the Hawks and it would have been nice to see them this year, but the Jets played them only once and it was in Chicago. More Hawks, more Wings, more Wild, but less Pens, Caps and Flyers, enjoy them while you can! One complaint that you will hear over and over is the fact two of the conferences will have eight teams and two will have seven teams with the top four making the playoffs. Mathematically it might be more difficult to make the playoffs with more teams in your conference...
Anyways, let's hear what you think about this four conference alignment plan.