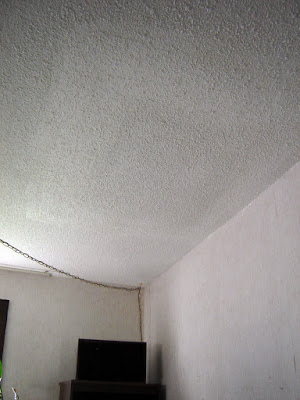 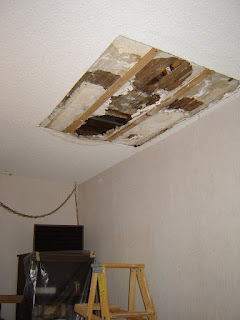 Many years ago (7 or 8 years?), we had water dripping from our dining room ceiling. Directly above on the second floor was the bathroom, so hopefully it was the tub, not the toilet. At the time we had a complete drum kit, a stack of amplifiers and mic stands directly below, so the dining room was quickly decorated in plastic. For months I positioned a couple of buckets on the floor to catch the drips and once in a while someone would kick the bucket causing wetness to the hardwood floors. Eventually we phoned a plumber from James Wall to investigate the problem, he tried snaking the bath tube drain and checking the edge of the tub that was pulling away from the wall or vice-versa. He finally cut a large opening into our ceiling (approx. 2.5'x4') and changed some of the pipes from the drain to plastic, problem solved.

I then cut a large piece of white foamcore to cover the hole. This worked for a week or two, then; drip...drip... the dripping was back, obviously the problem was not solved. I cut a hole into the foam big enough to let the leak drip to the floor and the bucket was back. It sat like that for years until about a year ago when my co-worker Brian lent me his drain-remover tool and plumber's putty. This tool fits inside the tub drain and unscrews the silver ring area, once it's removed you make a ring of putty and insert it between the foot and the drain ring when you screw it back in. Once again I screwed a fresh piece of foamcore over the hole and waiting to see if the leak returned, and guess what, it worked! 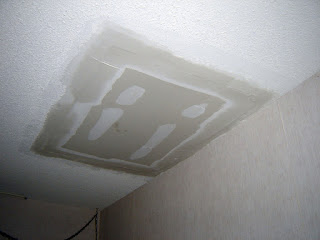 It sat like that for months and months until we finally we called up Handyman Connection and they sent over an old gentleman that patched up the hole over the course of three days. First day to cut and screw in a piece of drywall, second day to plaster the drywall over any gaps and the third to apply that stucco-stipple stuff on the ceiling. It looks great and almost unnoticeable, I guess the message here is to just do it and not wait for years to do something that really isn't a big deal. Now, about the holes in roof of the garage...!
Posted by binky at 11:27 PM 1 comment:

Anyone Else Get This? 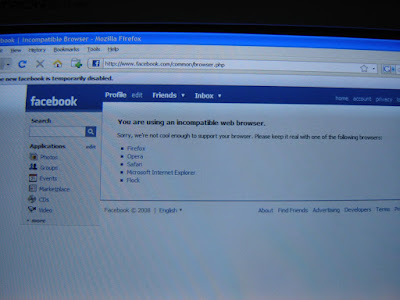 Tried to access Facebook today (and last night) and the message on the screen (see photo) tells me I am using an incompatible browser. What the hell! I use Firefox (Mozilla) and I upgraded to version 3.0.1 a week or two ago. Last week I also deleted one of my two free system security softwares and updated the ZoneAlarm security suite I kept. I could maybe understand the changes might effect my system and browsing settings, but I have used Facebook flawlessly the last few days.

Any ideas?
(Thanks Maraud for your comments)

Update: September 9, 2008- After reading on message boards that other people had similar problems with Facebook and Hotmail it seems the problem originates from the new (free) ZoneAlarm 8.0 security. There seems to be a glitch that doesn't recognize the browser for some reason and according to a ZoneAlarm tech, I should try to reset the settings and reboot the system. I did find if I cancelled the cookie control and anti-virus, Facebook worked, but what's the point of the security? It worked last night for a while, but it again failed to work Tuesday. I finally deleted the 8.0 and went back to the old 7.0 and for extra security I downloaded AVG 8.0. it works fine now.
Posted by binky at 2:36 PM 1 comment: