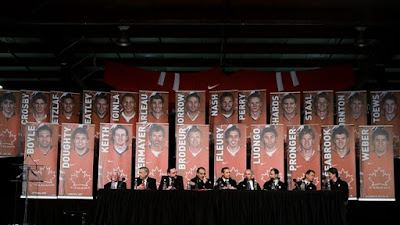 Hockey Canada executives unveiled Canada's roster for men's hockey for the 2010 Winter Olympics. Steve Yzerman announced the team Wednesday, let the complaining, criticizing and whining begin. Every team has it's critics and this team is no exception, but the appointing of Scott Neidermayer as captain and Chris Pronger, Jerome Iginla and Sidney Crosby as alternatives was a no brainer.
The only player I really question is the inclusion of Patrice Bergeron instead of, Brad Richards, Martin St. Louis or Mike Green. I noticed a third of the players play on a NHL team from the state of California. Let me know who you think should/shouldn't be on the team.
Posted by binky at 9:18 PM 4 comments:

Advanced D'n'D- The Vampire Strikes Back! 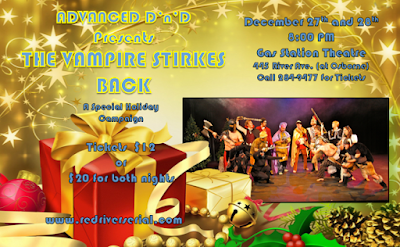 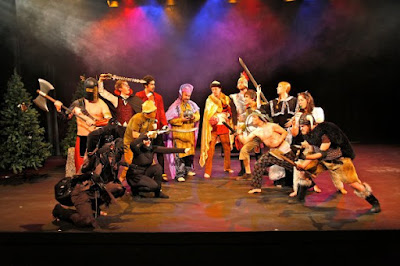 If you're getting bored of playing with your Christmas toys or just need a break from Boxing week sales, drop by the Gas Station Theatre for a two night run of Advanced D'n'D- The Vampire Strikes Back, starting tonight. This special holiday campaign will cost you a mere $12 a night or $20 for both nights. This campaign continues with most of it's ensemble cast from the Fringe run last July, as well as the two night run in October.

Good news for fans of the D'n'D series, the 2010 Fringe Festival lottery took place a few weeks back and D'n'D will be this Summer, stay tuned!

For more details about this show and a recap of past episodes, check out their website, Advanced D'n'D.
Posted by binky at 2:31 PM 1 comment:

Worst Quote Of The Year...So Far 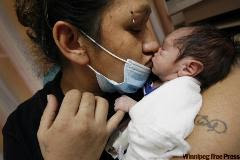 "She was screaming at me to help get her baby out of the toilet. I didn't know what to do," Keith said, quietly. "I just walked away."

"I just walked away"...this was the story from a week ago about the Winnipeg woman who gave birth in her toilet because she didn't know she was pregnant. Her 15 year old cousin, Keith Richard heard her screams and rushed into the washroom and found her crouched over...and he just walked away, some real family spirit in that family! The real Keith Richard(s) would never turn his back on a baby!

The new mother, Heather Richard pipes in with an equally inspiring quote, "I thought I had to crap," she says. "I could feel something hard in my belly. I thought, 'Oh my God that's a big crap.' "I thought, 'What the (expletive).' I didn't know it was a baby. I thought it was my intestines".

That crap turned out to be her newborn son. It's a good thing the cops happened to be at the house to arrest her on an outstanding warrant, otherwise because of Keith's (non-) help, the baby would have died. In a follow-up article in the Winnipeg Free Press, the mother vows... "We'll Make It", which of course should inspire the nation (and all parents that should not be parents) to stand up and vow to be good responsible parents. Let's hope for the kid's sake he's not treated like crap.
Posted by binky at 11:14 PM 1 comment:

Photo Of The Year...So Far! 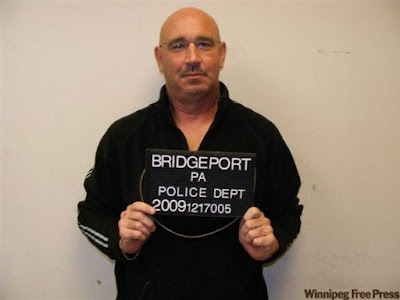 There's not much more to say, I think the smile says it all. Have a nice day Mike Kelly, good luck with your job search and way to keep your coaching options open. I'm sure the CFL has not seen the last of Mike Kelly, since the league seems to be lax to ex (and present-day) criminals. LOL!
(Read more in the Randy Turner's Free Press column)
Posted by binky at 7:55 PM 1 comment: 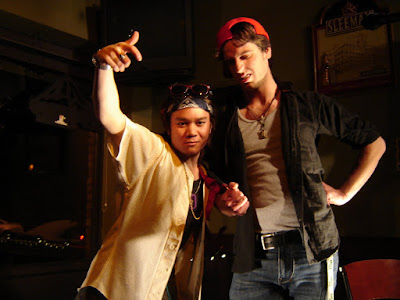 Jay Em - Leath L. Payne made their triumphant live debut this past Sunday at J. Foxs Freestyle Comedy Night. This local pseudo-gangsta-rap duo were the surprise hit of the evening performing 3 songs and providing more laughs than the actual comedy acts that pre- and proceeded them. 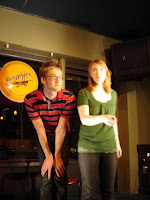 The first act of the evening was a new improv duo, 1 Foot 1, named because James Van Niekerk is one foot, one inch taller than partner Caitlin Curtis, clever...eh? I know improv isn't always about laughs and good story lines, but this performance provided little or no laughs and had more awkward pauses than a...ah..ah...? In improv, especially for duos, chemistry is a top priority and unfortunately there didn't seem to be a lot. Caitlin tried very hard to rescue scenes, but the lack of a compatible skill level made it difficult...and it dragged on a little too long. Maybe next time. 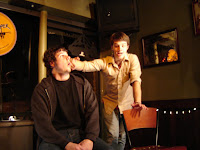 The other Improv troupe ("the best part...", the headliners) is the core cast of the Micro Theatre Company. The cast is made up of Liam Schumacher, Caitlin Curtis, Lucas Conway, Kya Dimaline and Erik Berg. They had their moments and despite the young age of most of the group, their experience as improver's was evident. They incorporated some weird kind of style where the members that weren't in the scene were actively writing short monologues (this style is called "Ghost Jail") that were read aloud on stage and was used as inspiration for the next scene. As I said, this was all hit and miss, but with more hits.

Squeezed in between was the highlight of the 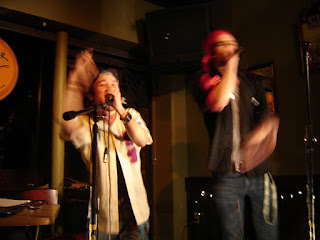 night, Jay Em - Leath L. Payne, whose identities have been shroud in mystery before this evening. What worked in their favour was that most people in the audience didn't know what to expect. Close friends have probably heard some of the songs on their MySpace page, but the question whether they would be able to reproduce their sound on stage was a challenge. Jay Em sampled their beats and music from a laptop on stage (all the music was originally recorded by both musicians), but all the vocals were live. Their music and lyrics were so over the top and a dead-on parody of this stupid genre, that you almost thought they were serious. The over-use of that annoying "auto-tune" was ridiculously funny. Songs with subject matter such as bullying, girls that like to be treated badly and religion are given an insensitive politically incorrect treatment that was laugh out loud hilarious. Hopefully next time they'll be given more time so they can perform a larger repertoire of soon to be anthems.

Here is the live recording from Jay Em-Leath L. Payne's set. It is also available on their MySpace page as well as the studio versions of these and other songs. 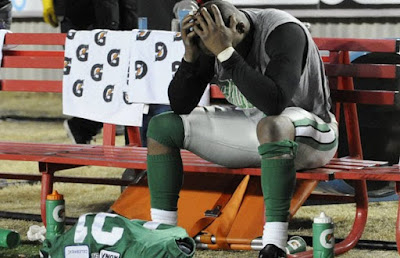 The supposed "13th man" on the final play of the 2009 Grey Cup was identified on television reports as all-star linebacker Sean Lucas, who was on the field for the first field goal attempt and not during the second and final attempt. The too-many men on the field call cost the Roughriders the Cup, but all the blame shouldn't be on one player. The coaches on the sidelines and upstairs in the spotting booth are ultimately responsible for who's on and not on the field, though each player should know which situation their responsible for. In hockey, the team is assessed a bench minor for too-many men on the ice and it's the coach that's blamed for that goof, ask Don Cherry.

Anyways, thank you Roughriders for your costly mistake. That mistake won my wife $1000 in a football pool when her ticket score matched the final score of 28-27 East! When Duval missed the first field goal attempt our hearts sank, but when we saw the flags thrown, we knew the money was back on the table.
Posted by binky at 11:15 AM 2 comments: