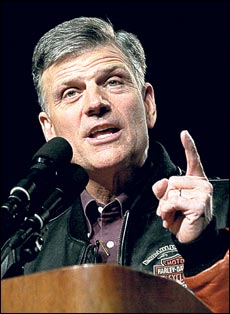 The Hogtown in question isn't Sam Katz's hope for Winnipeg, but it's me visiting good ol' Toronto last weekend. Seems it was a timely trip, as I read in Monday's Winnipeg Free Press, we had a visit from Billy Graham Jr, actually unlike Oral and Oral Jr. Roberts, Billy's kid has his own name, Franklin Graham.

TENS of thousands of people are gathering in Winnipeg this weekend to hear the son of Billy Graham preach the word of God and words to live by. But as much as Franklin Graham's words have inspired Christian evangelicals around the world, they've riled others who question his politics and tolerance of other faiths. Graham has been accused of inciting hatred toward Islam, calling it a "wicked and evil religion" in an interview on a U.S. news network after the terrorist attacks of Sept. 11, 2001. He's never taken back the remark, and Muslim groups in Canada and the U.S. have challenged Immigration Minister Monte Solberg for allowing Graham to enter Canada when a Muslim cleric accused of spouting hatred toward Jews was banned.

This "Graham fest" drew capacity crowds 3 straight nights (it should be noted that it was FREE admission, I'm sure even the Moose could sell-out everynight if it was free) drawing people from every (supposeably) demographic, young and old. The second night was was dedicated for people under 25, bribing these poor soles with "young hip activities" such as BMXer's and god awful Christian rock bands such as Tree 63 and the Newsboys.

"Going to church is not going to save you," he said. "Your parents cannot make that choice for you... If you come and stand before this platform, God will set you free. If you're here 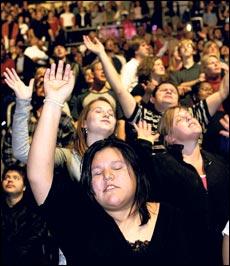 and guilty of abortion... God loves you, will forgive you, set you free and cleanse you of your shame." He said to the roaring cheers of the crowd that those guilty of adultery, sex outside of marriage and homosexuals should answer the call. "God will forgive you, take the guilt and shame out of your life." Close to 500 people answered the call, crowding the floor of the MTS Centre in front of the stage. They were met by "counsellors" -- some of the 1,000 volunteers from more than 200 churches who've helped organize the weekend-long event. Christian counselling volunteers were near to fill out personal information forms with them for future follow-up about joining local congregations.

Drawing on images of Hurricane Katrina's aftermath, Graham said a future disaster would wipe non-believers of Christianity from the earth. "God has judged this earth before, and God will judge this earth again," he said. "People talk about global warming and there's a debate whether it exists or not. Well, global warming's coming. The next time God's not going to judge this earth by a flood, he's going to judge it with fire."

I don't know about you, but I'm sure glad I got the hell out of Winnipeg, I think this guy's a bit of a wing-nut, yeah I know this is what organized religion is all about, the local churches put up 1.4 million dollars to hold this big sales conference, they bring in the big name, probably the person these brainwashed people think is "closest to God" and sell, sell, sell! The admission is free so EVERYONE is invited, but the idea is to convert the unconverted, so they have a chance to save themselves and get themselves to our churches and at church don't you have to leave an offering...perhaps you can call it a cover charge, for life. I'll tell you, the Billy Graham's and Oral Robert's of 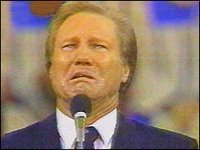 this world aren't living in poverty, that's for sure. How about hypocrites like that weepy Jimmy Swaggart and his prostitute scandel, who can denounce rival like Jim and Tammy Bakker, yet he warns his congregation about his troubles that "God says it's none of your business!"

I just love how Franklin Graham says you can "cleanse your shame" for things like homosexuality, come on! Teens and young adults struggle everyday with trying to be excepted for who they are, such as being gay, and he wants to "convert" and change you...this is bullshit! The comments about a future disaster that will wipe out non-believer's is weird. Could he have used Hurricaine Katrina as an example because he believes New Orleans is full of non-believers, especially during Mardi Gras? I guess you should convert if you live in "Sin cities" such as Las Vegas, Amsterdam or perhaps anywhere where the Girls Gone Wild crew travels, cause I'm damn sure there's lot's of "non-believers" there as well! Yeah! 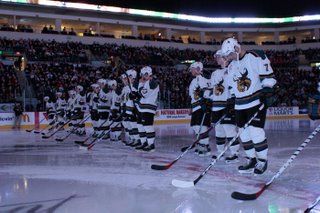 I know, it's actually a few weeks into the season already and it's taken me almost a month to update this blog. Yeah, I'm kind of excited, the last two seasons for the Manitoba Moose have caused this season to be one of great anticipation, but maybe the expectations are too high. We've been spoiled, in those two seasons, we had the opening of the MTS Centre, the NHL lockout, two exciting playoff runs and the AHL All-Star game.

I attended the home opener last Friday with it's smoke and mirrors opening ceremonies, which led to a disappointing loss to the Philadelphia Phantoms. The team was already 1-2 coming into their home opener 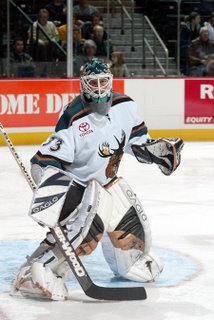 , so really it wasn't too much of a surprise, but they just came out really flat and uninspired. Despite the return of veteran (last year's MVP) Wade Flaherty, the Moose had a better line-up that wasn't dressed, as regulars such as Lee Goren, Brandon Reid, Maxime Fortunus, Jesse Schultz and Adam Keefe all sat out with injuries. They redeemed themselves the next night, in the rematch, with a much more spirited effort to squeeze out a 2-1 win.

It's good to see guys like Josh Green and Alexander Burrows still with the Canucks, but Flaherty probably had his last shot at the NHL, good for us, not so good for Wade. I suppose he could still be picked up on waivers if they attempt to move him back and forth from Vancouver, if there's an injury, I hope he gets another chance soon, he deserves it. Let me know how you think the Moose will do this season, and of course how you think the NHL season will pan out, it couldn't possibly be as exciting as last year, could it?

Photos by Rusty Barton, moosehockey.com
Posted by binky at 12:24 AM No comments: