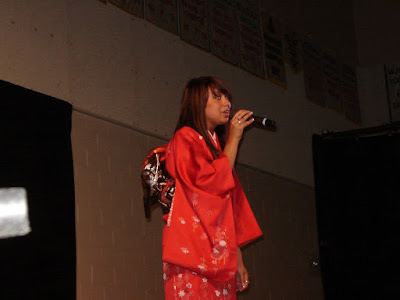 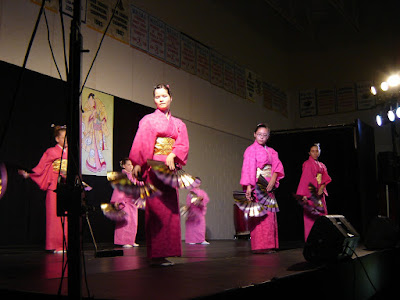 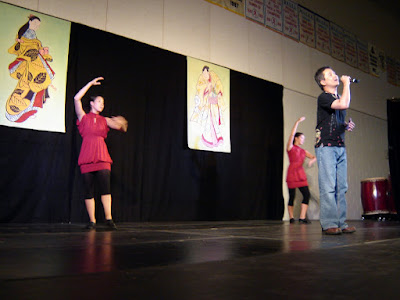 The last night of Folklorama always leaves me with a bittersweet feeling. On one hand it's a relief the week is almost over, no more late nights, no stress worrying about the show and no rushing straight from work to the Pavilion. Believe it or not there some things I will miss, like interacting with people from our JC community and the rush of the stage show running smoothly. Like most jobs there are people you get tired of seeing and hearing, but there are a few people I will truly miss. 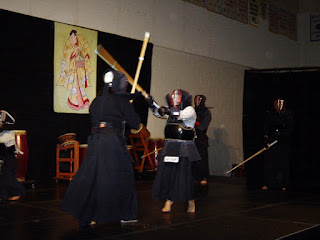 Highlights and observations from night 7:The evening concluded with a volunteer party complete with food, drinks and left-over beer. This year Rock band was the entertainment, complete with a projection screen and it was a lot of fun, but I definitely need to practice. There's always next year.
Posted by binky at 12:36 PM No comments:

Here's the Folklorama video that is aired on Shaw TV and the Shaw.ca website. Sumi does an excellent job explaining some attractions at the Pavilion with Shaw host, Joanne Kelly, such as taiko drumming, kimonos and food. Once again she represents the Pavilion well with her knowledge and incredible poise. I did a Shaw interview years back when I was an ambassador (with Tracey Koga as host, fortunately I never had a chance to view it) and it's hard, really hard to answer questions at the top of your head, I just "winged it", the difference being at the time I really didn't know much about dress, dances, drumming or even food. I must admit I'm extremely proud of Sumi, not only for how she presents herself, but also for her genuine love of Japanese(-Canadian) culture...Enjoy!
Posted by binky at 1:25 AM No comments: 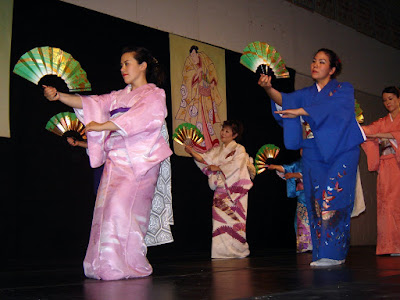 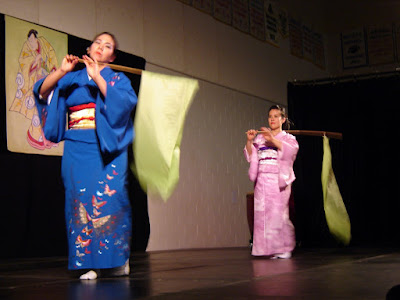 Hot weather, the Bomber game and going to the cottage are all reasons why there was a small crowd during the first show. Those excuses didn't hold up as the attendance recovered for the second and third show aided in part by bus tours. The second show had two buses that totally almost 100 spectators and the usually sparse third show was boosted by another bus full of seniors from the States. 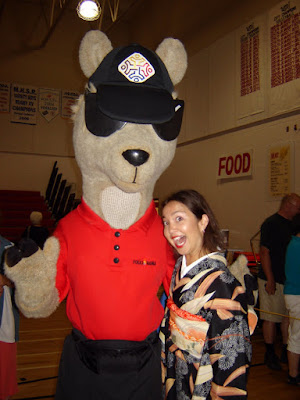 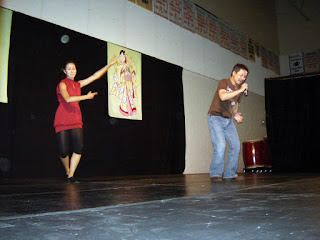 Highlights and observations from night 6:Saturday is the last night for the Japan Pavilion and it will be a welcome relief to have a day off on Sunday. The last night also means the volunteer party, so I might not have the energy to post immediately after Saturday's show, because I hear that Rock Band will be the featured form as entertainment and the beer is gratis. If that's the case, I'll get the posting up Sunday or Monday. This may include my wrap-up with more photos and stories from the past week. Stay tuned and please leave your comments and thoughts about the week.
Posted by binky at 1:24 AM 1 comment: 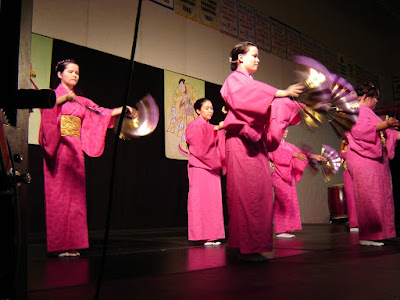 The last three nights of Folklorama are traditionally the strongest nights for attendance and sure enough Thursday night's shows were the best attended so far. Two full houses (for the 1st two shows) aided by a couple of bus tours, helped push the totals closer to previous years and with Friday and Saturday to come, it should be a successful year (I am unofficially speculating so don't get excited yet!).

Highlights and observations for night 5:During Friday's late show, a video company hired by Travel Manitoba will visit our Pavilion. The video crew will follow a tour group on their motorcoach, as well as inside the Pavilions they visit. This video, travelogue if you will, is going to be used for promotion, sales and education for Travel Manitoba. Sounds exciting...not!
Posted by binky at 12:48 AM No comments: 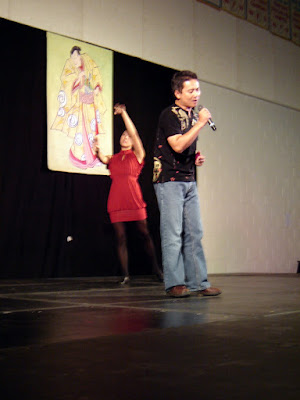 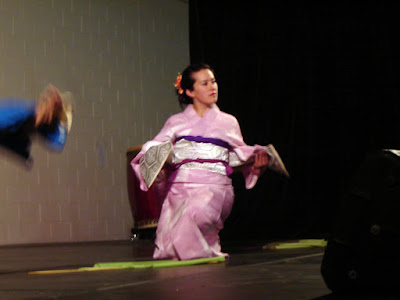 I didn't get home until after midnight because of the Wednesday late-night party hour tonight, so I'll have to leave you with an abbreviated version because fatigue may play a big role tomorrow at work.

Highlights and observations for night 4:The weeks more than half over now, but there's still lots to see and hear. I'm already looking forward to sleeping in on Sunday...sigh.
Posted by binky at 12:58 AM 1 comment: 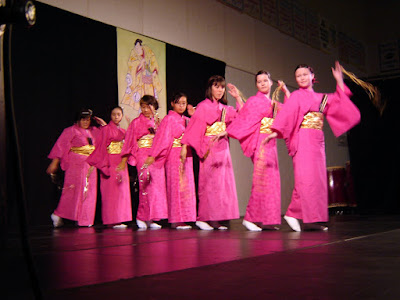 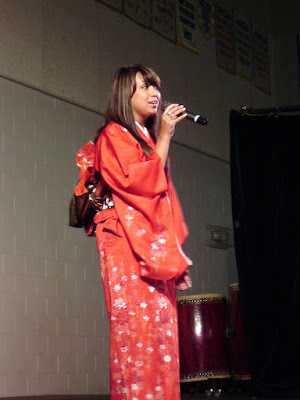 An appearance by the Lieutenant Governor of Manitoba, the honourable John Harvard, highlighted day three of Folklorama at the Japanese Pavilion. The crowds are continuing to grow and the bus tours are arriving in droves, yet a comfortable feeling of "being in control" is being felt by many of the volunteers. From an entertainment standpoint everything is running smoothly and the performers are relaxed and having fun, we couldn't ask for anything more.

Highlights and observations from night 3:Wednesday should be exciting as Yuki (I'm not sure what his last name is...anyone know?) makes his first appearance as a singer and as I mentioned earlier, late night karaoke. I think it'll be a good time to try one of those Folklorama beers!
Posted by binky at 11:56 PM 1 comment: The crowds returned in large numbers to the Japan Pavilion on day two, I'm guessing half of Winnipeg must have returned from the lake because there was a line of people waiting outside the front doors already at 5:30pm when I arrived. The first two shows enjoyed near capacity crowds and I expect them to grow in numbers as the week goes on. The show was similar to the previous night with the exception of different dances performed by the Aurora dancers.

Highlights and observations from night 2:Tuesday will be an important night as the Lieutenant Governor of Manitoba, John Harvard is scheduled to pay our Pavilion a visit, as well as CITY-TV...should tuned.
Posted by binky at 1:35 AM No comments: Before the first night of Folklorama is always stressful and uncertain, will the stage be finished, will the performers be confused, will the show run longer than the allotted time slot, will an audience show up? All these things are legitimately concerns, but every year everything comes together and runs smoothly as it did last night. The performances on stage were top notch and well rehearsed and the show itself, which we formatted differently from last year, seemed to run without any glitches. The one thing that was noticeable was the smaller than average crowds for all three shows. The disadvantage of hosting a Pavilion on the first week is that the crowds are small early in the week because of the long weekend, but they gradually grow toward the end of the week. The second week is traditionally more successful financially because of the momentum carried from the first week via word of mouth and media reports and reviews. Some highlights and observations from Night 1:Overall a good night, maybe a little tweaking here and there, but should be a good week as long as the air conditioning holds out. In case your wondering about other aspects of the Pavilion I probably won't go there, I'm writing this from the point of view of a entertainment coordinator. I'll try to keep each day brief as it's hard to write something every night as well as working a 9-5 job, last year I stayed up late a minimum of 2 or 3 hours to write after coming home after 11pm. Thank you civic holiday!
Posted by binky at 10:54 AM No comments:

This year's Folklorama motto, "How far will you go?" can be interpreted, oh so many ways. It can be used to describe an unique approach, pushing the limits and maybe going to extreme measures. I doubt this is the case because Folklorama always plays it safe, Pavilions are not allowed to make political statements nor are they allowed to tread in controversial subject matter despite the historical significance (such as the internment of Japanese-Canadians by the Canadian Government) and for Folklorama to push it's limits means trying to attract a younger demographic by holding late-night parties (booze-fest) at select Pavilions since many view Folklorama as a seniors bus tour-type of event.

It can also mean, how many countries (Pavilions) can you see in 2 weeks? I heard a while back that they might bring back the passport pass where you could purchase an all-you-can-see passport for a set amount of $ and you would get each Pavilion's page stamped with a different stamp, sort of like seeing all these different countries. It was a popular idea 10 years ago, but I'm thinking it was too cost worthy for the Folk Art's council to swallow. In the past I remember there was also a Folklorama bus that was free to passport holders that ran a couple of routes from Pavilion to Pavilion. It cut time finding a place to park or if you didn't have a car you didn't have to reply on public transit to find yourself to the Pavilions. More than likely, "How far will you go" refers to how far will you travel to Winnipeg to see Folklorama (from out-of-town), obviously one of it's major sponsor's Westjet takes delight in this tie-in and other years (maybe this year too, I'm not sure) a contest entrant has received a free flight to anywhere Westjet flies. Yes, the power of the sponsor! I received a list of all the official sponsors that have the exclusive right's to everything from beer, banking institutions, hotel services, soft drinks, and money transfer services...yes, Western Union is the official money transfer service of Folklorama 2008...what the hell? Even at our Pavilion, which is a school the other 358 days in the year, one of the vending machines is covered with paper to cover the fact the machine has "Coke" products inside. All official sponsor signage must be visible in the Pavilion and a two and a half minute CD that again recognizes the sponsors must be played before every show. I'm not saying there's anything wrong with corporate sponsorship, I'm just saying each Pavilion is starting to look like the MTS Centre where the boards, the ice and every inch of the building (including in the bathroom) is plastered with advertising.
Posted by binky at 1:56 AM No comments: