Are They Really Returning? 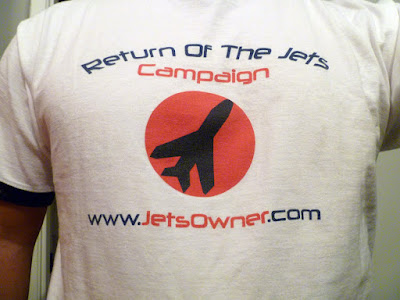 T-shirt from the campaign to bring an NHL team back to Winnipeg from about 10 years ago.

Yes! All indications point to a return to the NHL for Winnipeg after much publicized reports that the deal is done and will be announced on Tuesday. Before we get carried away and mortgage the house to buy seasons tickets, we need to await the official word from the league. This spring's playoff has been overshadowed (at least in Winnipeg) with the possible relocation of first, the Phoenix Coyotes, who may only have one more year left in their present location, then the talk of Atlanta selling it's team. I really do feel bad for the hockey fans in Atlanta and I'm sure there are actually thousands that are being treated with no respect from the organization, but the reality is the league's pip dream that the deep south US will embrace the game has backfired in the NHL's face. 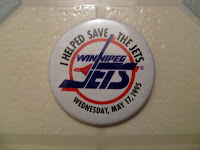 I remember the rally to keep the Jets in Winnipeg and how many thousands of people came out offer up their support. It was so sad, images of kids bringing their piggy banks and fans pledging cash all for nothing. Anyone know what happened to that money? Times have changed since 1996, we have a new-ish downtown arena, the dollar is above par, the league has a salary cap and supposedly the economy is better in Winnipeg. Can we support another NHL team? I think in the short time, yes! There will be that honeymoon period during the first few years when I undoubtedly think the fan support will be good, but what happens if the team has losing seasons (beyond the first 3 years) and we can't afford to keep the players that are rising stars and will demand significant salary raises? The league has so many dead dog teams that I wouldn't pay top dollar to see, but if we want to keep our team, the building needs to be close to capacity every night. When I had season's tickets in the early/mid 80's (when I was in high school), there were some games that were a waste of time and boring and I must admit the Moose were just as or more entertaining that a majority of the Jets games I suffered though. The Moose had some major crowds in their first couple years at the MTS Centre, but attendance has dropped even though the team has been competitive. This city has many fair weather fans that are known to ride the bandwagon and then jump off when times are tough, the Bombers are a perfect example.

Is this the real deal? I've been skeptical all these years whenever there are rumours the NHL will return, so I have been proceeding with caution and not getting my hopes too high. This is definitely the closest we have come since the team left and according to many reliable sources the deal is all but done and that there are only a few loose ends before making their official announcement. I have to admit I'm excited, I've always felt Winnipeg lost some degree of cred when we lost our team and though the Moose have been very entertaining, competitive and affordable, nothing beats the caliber of the NHL. Whenever I travel to another city that has a NHL team, I make every effort I can to see a game. In the last few weeks I have had some mixed feelings because I know I won't be able to afford to go to many games. With the Moose, I have a mini-pack which entitles me to about 11 games a year (including the home opener), but with the higher level of play and higher salaries of the NHL, I'll be lucky to go to 2 or 3 games a year and instead of affordable entertainment, tickets to a NHL game will be a luxury item. My seats are currently the least expensive seats in the lower bowl, but with the NHL the whole lower bowl will be filled with season's tickets and at least 4 times the cost per game. I'm holding out hope my friends or family will offer to share games and possibly pony up for season's, but that's probably a long shot. I feel I'll be left out in the cold if we get the NHL with less hockey to watch and for purely selfish reasons I'm considering holding some kind of fundraiser for myself so I can purchase tickets...yes, that would be extremely selfish!

Hope the news is good on Tuesday! See you at Portage and Main!

I am sorry to say that I do not look forward to the return of NHL hockey to Winnipeg. I think it would be a drain on a, soon to be weaker, Winnipeg economy. The Conservative plans to eliminate the CWB's monopoly will effectively kill the CWB and directly end close to 500 local jobs. It will get worse though as it will also mean the loss of jobs from related industries as grain companies, federal agencies and railways relocate or eliminate local jobs. Then there will be the loss of jobs of people who had depended on these grain industry positions for their livelyhoods. I would not be surprised to see Winnipeg lose anywhere from 1,000 to 2,000 jobs when the CWB shuts down in Aug 2012. Will we still be able to afford the NHL after losing that many jobs?