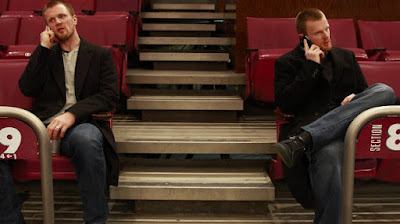 I don't have much time, it's 15 minutes before April 13 the first day of the playoffs and I want to make my predictions without the influence of seeing the results of the first game. The first round is my favourite round of the playoffs, guaranteed to see at least a couple of upsets! 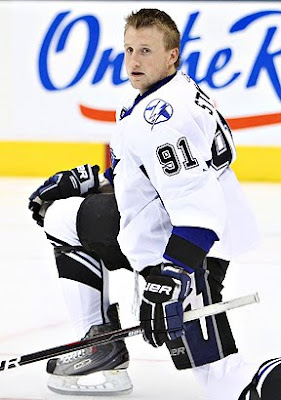 EASTERN CONFERENCE
Washington (1) vs New York (8)
I have my doubts about the Caps, though they did finish first in the conference. They must have done something right despite Ovechkin having an unspectacular season. I still can't see the Rangers pulling an upset...seriously.
Washington in 6

Philadelphia (2) vs Buffalo (7)
The Flyers are ripe for being upset, Pronger probably won't be available and he's a big reason the Flyers made it to the finals last year. The Sabres are hot and with Ryan Miller back this could be the year of redemption the Buffalo fans have been waiting for. I would pick the Sabres, but I chose too many Flyers players in some hockey pools already...it will be close!
Philadelphia in 7

Boston (3) vs Montreal (6)
A classic battle, two long time rivals, with extra animosity carried over from a couple intense head to head clashes in the regular season. The Bruins have size and brawn while the Habs have speedier, but smaller forwards. Goaltending will be the key and both goalies had stellar seasons. Carey Price will have to be the best player on the ice if the Canadians have a chance... I have a hunch.
Montreal in 7

Pittsburgh (4) vs Tampa Bay (5)
No Crosby? Why would he practise with the team if they didn't think he will play this season? I think he'll be back, maybe not this series, but maybe the next if they make it that far. The Lightning seriously outmatch the Pens, at least offensively, but as we know in the playoffs defensive play and most importantly, goaltending makes the difference. Fleury has been good and has carried this team through their key injuries, while the Lightning's goalies have not been good. Even with a Crosby and Malkin-less team, the Penguins will score...enough to win the series.
Pittsburgh in 6 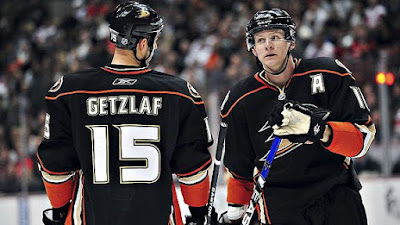 WESTERN CONFERENCE
Vancouver (1) vs Chicago (8)
Chicago barely made the playoffs and they have the Wild to thank for beating the Stars on the final day of the regular season. When these two teams met last year in the playoffs their rankings were almost reversed. This year the Canucks have been touted as the team to beat for the cup and wouldn't it be a major downer if they were eliminated in the first round. The Hawks aren't neared as deep as last year and the Canucks probably have the most solid team from front to back, but as you might have guessed...I love the Hawks! Sorry Vancouver, give Hodgson and Oreskovich back to the Moose for their playoff run!
Chicago in 7

San Jose (2) vs Los Angeles (7)
The Sharks quietly had a great year, despite modest stats from their stars, Thornton, Heatley and Marleau. The Kings will be missing their two best players, Kopitar and Williams, so they pretty much don't stand a chance no matter who they're playing. Short series.
San Jose in 5

Detroit (3) vs Phoenix (6)
The Coyotes should have beaten the Wings last year, but the Jets curse still haunt the Coyotes. This franchise hasn't won a playoff series since 1987, when they were still in Winnipeg and when Dale Hawerchuk was in his prime...pathetic! I think the Red Wings are in for a fight and if Zetterberg misses most of the first round, the curse might be broken.
Phoenix in 7

Anaheim (4) vs Nashville (5)
Big time scoring from the Ducks. Corey Perry is having a MVP season, Getzlaf is healthy, Bobby Ryan is maturing and Teemu Selanne is playing like he did with the Mighty Ducks 15 years ago! Despite being close in the rankings, this might be the most lopsided series of the playoffs. Speaking of droughts, the Predators have never won a playoff series and they won't in 2011 either.
Anaheim in 5
Posted by binky at 11:44 PM