This Is Gonna Be The Year! 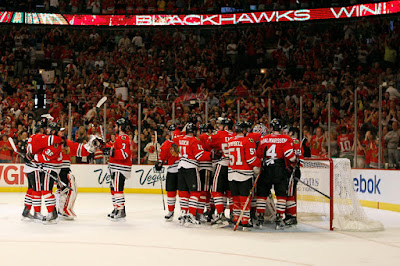 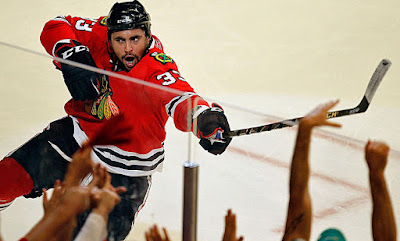 ...that the Chicago Black Hawks will break their record long drought and win the Stanley Cup! It's been 49 years, last time they won it was the 1960-61 season. Finally, after all these years of supporting the team through the good, the bad and awful years, I am proud to wear red, black and white.

My first memory of watching NHL hockey was during the 1970-71 playoff finals with Chicago playing the Montreal Canadians. The sheer excitement and speed of the game captivated me and despite being Canadian, I cheered for the Hawks. I'm not sure why, maybe it was Tony Esposito's mask or I liked their jersey's, but since that series I have been a dedicated and long-suffering fan. (The Canadians won the series 4-3) They have come close since, in 72-73 it was another Esposito/Dryden showdown again with the Habs winning the Cup 4-2 and more recently in 91-92 the Hawks made the finals and were swept by the Penguins 4-0 (Lemieux/Jagr era).

If you're a Hawks fan you have reason to be excited. I truly believe their chances are very good they have a realistically great shot at winning the Cup. Everything has come together at the right time and as the playoffs have progressed they have been stronger every game. Who would have predicted the Hawks would sweep the Sharks and that their biggest test in the playoffs so far was the first series against Nashville. If you go back to game 5 against the Preds when Nashville led 4-3 the game with less than a minute in the third, then Marian Hossa took a 5 minute major. If the Preds hung onto that lead they would have taken a 3-2 lead in the series, but instead Kane scores shorthanded with 14 seconds to tie it, then Hossa (fresh out of the penalty box) scores in OT to give Chicago a 3-2 series lead. That dramatic turn of events in my mind was the turning point of the playoffs for Chicago. 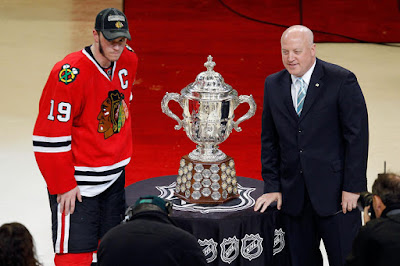 So, this week get out all your Blackhawks memorabilia and proudly cheer Winnipeg's newly adopted team...or at least my favourite team, but hey, Jonathan Toews is great reason to get behind the Hawks. JT from St.V has been amazing and has to be considered a front runner for the Conn Smythe and as long as the Hawks don't take the Flyers lightly I have a good feeling about how this will end. I've been waiting my whole lifetime and it would make my day (and year) if the Cup returns to the windy city and isn't it a coincidence that I finally went to a Hawks game in Chicago this April (last regular season game). I guess getting a ticket for one of the Cup final games is out of the question...or is it?
Chicago in 6

In case there's any confusion of when to NOT make plans (other than watching hockey), here are the dates of the Stanley Cup finals:

I am keeping my fingers crossed for you Binky! I think you have suffered long enough an euthanasia is not the answer.