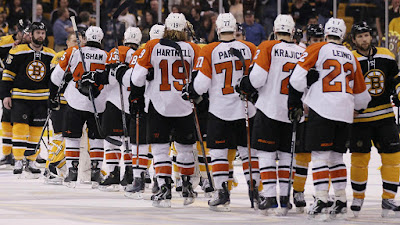 Can you believe the playoffs so far? First, the Canadians knock off the heavily favoured Capitals in round one, then dispose of Sidney Crosby and the Pittsburgh Penguins in round two and tonight the Philadelphia Flyers complete their amazing comeback against the Boston Bruins. The Bruins took a 3-0 lead in the series before the Flyers squeezed out a overtime win in game 4 and carried that momentum all the way through to game 7. Not since the 1942 Leafs and the '75 Islanders has a NHL team come back from a 3-0 deficit and to top it off, the Flyers were down 3-0 in the first period of game 7, then went on to to win the game 4-3.

So this brings the question, what is more surprising or amazing?...the Canadians eliminating Washington and Pittsburgh or Philadelphia's come from behind series win against Boston?

Round 3 Predictions
EASTERN CONFERENCE
Philadelphia (7) vs Montreal (8)
So, your team battles through 84 regular season games so you can seed higher in your conference to gain home ice advantage and it eventually turns out it's the bottom two teams that end up in the conference final...who would have predicted this! So far, home ice has been bogus, all the game sevens this year saw the visitors win and I think the visiting teams have won the majority of games (don't quote me on that one) so far in the 2010 playoffs. What's with all the too-many men on the ice penalties, something like 33 or 34 so far with only 17 all of last year's playoffs. Of course, the decisive winning goal for the Flyers was scored on the power play because of a too many men penalty.

On paper and based on the regular season, both teams shouldn't be here, but they are because they deserve it and have played playoff hockey like it should be played. The Habs are still riding the heroics of Halak, but in round two the Canadians had some offensive help from the Gomez, Cammelleri and Gionta line. Montreal has blanketed the scorers from the Caps and Pens and they continue to play a solid-two way game that will be hard to beat. The Flyers finally got some valuable contributions from Richards, Briere and Gagner during the last 4 games of the series and are 7-1 with a healthy Gagner in the lineup. The key will be goaltending, Halak again needs to be solid, but shouldn't be as busy as the past two series, while the Flyers will have to rely on Michael Leighten to carry the load, as injured starter Brian Boucher will not be back this round. I'm expecting a long and exciting series with two underachieving teams from the regular season battling for a chance to play in the Stanley Cup...and there will be more riots in Montreal!
Montreal in 7

WESTERN CONFERENCE
San Jose (1) vs Chicago (2)
What a contrast from the Eastern conference, the two top seeds actually making it to the Conference finals. The Sharks played to their potential against Detroit with only one game where they were outplayed and blown out. The Sharks are dangerous because they have a solid balance from their forwards back to their defence and netminder. Joe Thornton has apparently woken up and finally contributed in the playoffs, lessening the load off the other "Joe", Joe Pavelski that is leading the team in scoring. Chicago is led by Jonathan Toews, Patrick Kane and Patrick Sharp who were able to score at will against the Canucks and need to deliver big time against the Sharks if they hope to win the series. Both goalies have had their times of brilliance and disappointment, so this is a toss up, I also think this series could go the full seven games. Can the Hawks beat the Sharks and make it to the finals and win their first Cup since 1961 or will the drought (the longest in the NHL) continue??
Chicago in 7

8-4 is pretty damn good. Worst you can finish is 8-7 now and I think you have a a better than even chance to finish at least 9-6.

If the Hawks win will you be out in the streets screaming and stopping traffic?