"Quote Of The Day" 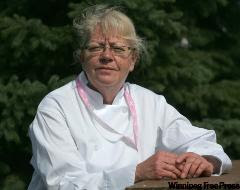 "She trusted the man because he presented himself as a Christian".
Not quite a quote, but a quote from the article that appeared in the Winnipeg Free Press on Thurday July 24th.

The spacious two-bedroom apartment with gleaming hardwood floors and marble countertops seemed almost too good to be true.

And $1,200 later, the apartment Trish Wilde thought was a sure thing turned out to be nothing more than attractive photographs and broken email promises from someone she says just pretended to have space for rent.

Wilde's son and his girlfriend were desperate for an apartment for Sept. 1, Wilde said, as their current lease expires soon. When they saw a listing on the classified website Kijiji for a two-bedroom apartment on Grosvenor Avenue, "they jumped at it."

The ad listed an apartment for $800 per month, including utilities. The advertiser said he was a mechanical engineer who'd been transferred from Winnipeg to New Jersey, said Wilde. He said he had the keys with him, so he couldn't show the apartment in person, but sent photos of the suite instead.

Wilde said she wired $800 for the first month's rent and a $400 damage deposit to London, England, covering the costs to help out her son. The man said he'd been sent to London unexpectedly for his work, she said.

Wilde said she trusted the man because he presented himself as a Christian. She said her son and his girlfriend even sent photographs of themselves so the man could get a sense of the new tenants, at his request, and received photos the man said were of him.

But after receiving the wire transfer, the man demanded another $800 before he would send the apartment keys, said Wilde. The Grosvenor building is managed by Sussex Realty, and when Wilde and her son called to check, they learned no one with the man's name lived in the building.

"We've got to do something to stop this," Wilde said. "This guy has probably made a killing."

The alleged scam might not be the first of its kind in Winnipeg. In late April, an ad for a Kennedy Street apartment with nearly identical wording to the Grosvenor Avenue ad was flagged as a scam by a Kijiji user.

In recent months, more near-identically worded ads for apartments in St. John's, Victoria, Kamloops and Halifax were flagged as scams by Kijiji users, one as recently as Wednesday.

"It's unfortunate, that I think a lot of renters right now are so desperate for a suite that they are sending money to people they don't know," she said.

Campbell said people can always call property management companies to check on suites listed online, and should always submit applications and damage deposits directly to the companies, not to individual renters. Any receipt for payment should come straight from the company, she said.

Wilde said her son went to police and was told not much could be done, and that online scams happen often.

Kijiji's website says people who think they've been scammed can contact a number of groups, including RCMP, Crime Stoppers, PhoneBusters, the Competition Bureau and the Reporting Economic Crime Online website. Website users can also report ads they think are scams using a link on each page.

1) In this day and age, why do people still wire money to strangers, especially over-seas? Use a transaction that is accountable and recoverable. Don't people watch enough movies about scams to know better? Stupid people!

2) Okay, if you trust someone because they present themselves as Christian, this should have been the first clue to run. Wow, there are suckers born every minute!