I Could Have Met The Emperor Of Japan Right Now! 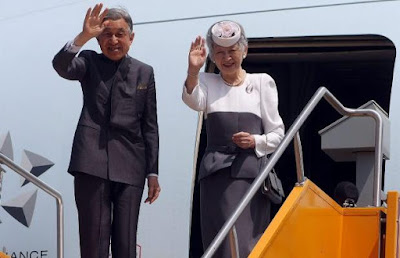 ...but I'm not, I'm still in Winnipeg and not in Vancouver where the Emperor Akihito and Empress Michiko are spending their last day in Canada. Yes, I had the opportunity to meet royalty, I received an invitation over a month ago, but I turned it down.

Your probably wondering why I would even get considered? It's because I'm the local President of JC's and the Emperor wanted to meet select members of the community. When I received my invite, reaction from my friends, co-workers and family were a little mixed. I was told by many this was a once in a lifetime opportunity and this honour should override any financial considerations...oops, forgot to mention, I would have to pay my own way to Vancouver and wouldn't be compensated by said organization... That was strike one.

The date of the reception is today, July 13th from 4:45-5:05pm, yes, only 20 minutes! It would be $500 for airfare, probably another couple hundred for hotel and I would have the pleasure of being in the same room as the Emperor for 20 minutes!...that's strike two.

While most of my friends really encouraged me to attend (my boss even offered to pay half my airfare!), I had the impression some felt I wasn't worthy enough to meet royalty. I'm just some shmuck who frames pictures, listens and plays some music and writes stupid blogs, not someone with a respectable and "important" job that contributes anything important to this world. If you want to think about this in a Japanese Canadian historical point of view, we shouldn't be cheering and bowing to the symbol of Japan because of the internment and our upheaval from the impact of Japan attacking Pearl Harbour. I know this sounds extreme and really isn't the point, but in some ways I don't feel a great deal of connection with Japan...so that makes it strike three.

In the end I felt I could save the money for something I really want to do. The days of sitting lakeside and sipping a cold one are fast approaching and I'd rather spend two weeks at the cabin than two days in Vancouver and it's got to be a lot cheaper. I'm also planning a September roadtrip to Minneapolis/St. Paul to catch a concert by the Minus 5/Baseball Project/Steve Wynn IV (I'll write about this soon on my other blog), which I'm really looking forward to!
Posted by binky at 3:51 PM