It's been over two weeks since I spent a short, but sweet vacation in Minneapolis, Minnesota. Actually, I was there 5 days and 4 nights, the longest time I have spent in the Twin Cities. I was thinking the other day about how I have been to Minneapolis more than any other city, It is the closest large city within one day's drive and there is so much to do and see every time I go.

The first time I visited Minneapolis it was on a school trip with my University Art class. Every year the first-year students get the opportunity to visit world-class art galleries, the Walker Art Centre (which houses Modern Art) and the Minneapolis Institute Of Arts 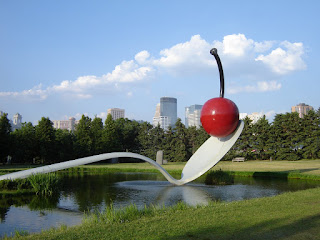 (old masters and museum style) and we stayed in a hotel close to the old bus depot in downtown Minneapolis, just off Hennepin. We were within walking distances of all the shopping and all the cool night spots (this is the mid-80's pre-Mall Of America), I spent hours in Northern Lights Records, Let It Be Records and a variety of bookstores (some even adult) on the strip. I also took in a North Stars game as one of my classmates was a friend of Mike Luit (goalie of the St. Louis Blues) and by coincidence the Stars were playing the Blues at the Met Centre in nearby Bloomington, which is now the site of the Ikea by the MOA. This trip was monumental of many reasons, it was the first time I visited a large city without my parents and it introduced me to a whole pile of new indie music that I had never been exposed to in Winnipeg..yes, the records I bought are considered high priced imports in Canada. 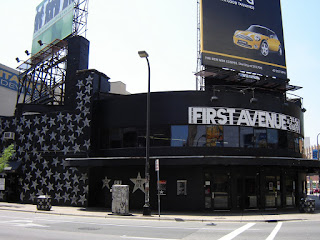 My second visit was on the fourth-year art school trip, I became more adventurous and went to the First Avenue nightclub for the first time. It wasn't to see a band, but it was some sort of disco inferno type of thing, it must of been around the Prince Purple Rain-era of the club, so it was a very popular nightspot. I just remember you had to sign your name so the security staff could compare your signature with your photo ID (in these days Manitoba didn't have photo ID yet) and they had metal detectors at the door (this was pre-911 security measures). I also discovered Loring Park which was across the freeway from the Walker Art Centre, a large green space and pond on the edge of downtown. I spent a nice afternoon in this park with my friend Deb feeding the giant mutant-sized Black squirrels that inhabited the park. 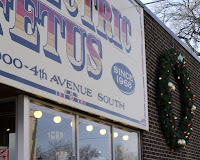 Through the late eighties I went to Minneapolis because my girlfriend's family attended Minicon (yeah I'm not joking, a Sci-Fi convention!) and I knew it was another chance to invade all the other great record stores in the surrounding area. Down In the Valley, Electric Fetus, Roadrunner, Garage D'Or, Aardvark, Oakfolkjokeopus, Know-Name and one of the largest record stores I've seen, Cheapo. I also went to even more North Stars games including a playoff game and one of the last ever North Stars games in their history (until the Wild came along).

I seem to visit Minneapolis almost on an annual basis, th 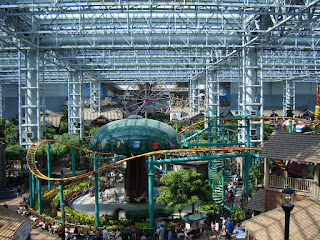 e occasion is usually to see a band that won't be coming to Winnipeg in the near future or in this most recent case my wife's business trip. There are places that are becoming habit in recent years, the Mall Of America of course, I tend to stay in Bloomington near the MOA, but this year it was on 11th and Marquette in downtown Mpls. I really like the Uptown area (Lake/Hennepin) as there seems to be plenty of cool stores, unique restaurants and clubs a plenty. I still check-out some of the record (CD) stores as this time I revisited Electric Fetus (I haven't been there for years) and it still reeks of incense and they still have a section of smoking accessories(pipes etc.), overall an excellent CD store. I saw Fountains Of Wayne at the First Avenue and I attended a concert/interview with writer/musician Laurie Lindeen and friends (Paul Westerberg, Steve Wynn, Mark Olson and Lindeen's ex-band, Zuzu's Petals reunion) at the legendary Fitzgerald Theatre in St. Paul. Speak 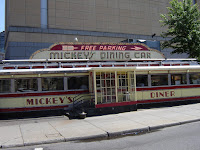 ing of St. Paul, after I took this picture of Mickey's Diner in downtown St.Paul, I went back to my hotel room and flicked on the TV and watched the Mighty Ducks movie. There was a scene where the coach Gordon (Emilio Estevez) talks to one of his players (the one whose mother the coach has a crush on) inside this very diner where his mother is a waitress. The movie was filmed in and around the Minneapolis/St.Paul area, thought that was kind of funny.

I always have a great time in Mpls and I feel very comfortable finding my way around this big city. It's starting to make sense when large cities have numbered streets and avenues, much easier to find places, just remember to factor in the north, south, east and west. If I ever had to move to an American city, it would definitely be Minneapolis.

Paul Westerberg (Grandpaboy)- Mpls mp3
(*The title for this blog entry is in the lyrics of this song.) I saw Paul perform this time for a couple of songs at his wife's (Lindeen) show, as well as in 2002 when he performed solo at the Guthrie Theatre. One of my all time favourite performers, would love to have seen the Replacements.

Lucinda Williams- Minneapolis mp3
While I was in Minneapolis, Lucinda was in playing in Winnipeg, is that weird or what?
Posted by binky at 12:50 AM